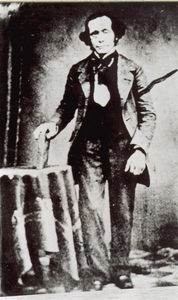 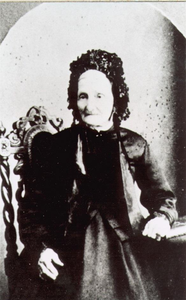 Mary Dodd (nee Wallbank)Your ancestors, Mary and William Dodd were both born and married in the County of Warwickshire, England: the birthplace, too of William Shakespeare!  When they married in October 1832, William was a shoemaker and jobbing smith and the couple lived in Windsor Street, Leamington.

Mary was three and a half years older than William. She was born in August 1804 at Atherstone, the daughter of Richard and Elizabeth Wallbank (nee Portman) 1 and, like her eight siblings, was baptised at Coleshill Parish.  It is likely the Wallbank family were involved with milling at Coleshill.

William was born in February 1808, the second son of William and Mary Dodd.  He had seven brothers and sisters and they were all christened in Brailes.2  William’s mother (also named Mary) was listed as a pauper on the 1851 census at Grove End Farm: a place that still exists today. The following entry appears in Tracing Your Ancestors in Warwickshire under the heading, Brailes: ‘Tragedy struck the parish in 1876-1877 when 37 children died of diphtheria’. Mary senior’s grandchildren, Katie Louisa and William George Spicer, aged 4 and 7 respectively, were among the victims.

By that time, our family had long emigrated to South Australia with their first four children: five-year-old William, two-year-old Charlotte, and seven-month-old twins, Mary and Eliza.  They left Plymouth with 600 emigrants aboard the Buckinghamshire, a vessel of 1466 tons under the command of Captain Moore.  It anchored in Holdfast Bay, South Australia on 22 March 1839. 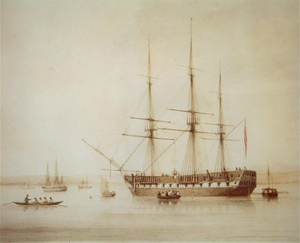 1839 painting by Col William Light of the Buckinghamshire (original at Art Gallery of SA)The beginning of Mary and William’s life in South Australia was very traumatic.  They were living at the Emigration Depot until accommodation and employment could be arranged.  While there, the twins died within a week of each other.  These babies were buried at the Holy Trinity Church in Adelaide.

For the next 18 months the family lived on the Adelaide Plains whilst William had formed a partnership in a blacksmithery business with Messrs Ockenden and Palmer in Grenfell Street, Adelaide.  The blacksmith trade covered a much wider sphere of operation than does the term today.  Farriering, of course, was of major importance but at that time most farm implements and tools plus gate hinges and fastenings were hammered and wrought into shape on the anvil by skilled tradesmen who often satisfied their artistic aspirations in the fabrication of excellent ornamental wrought ironware.

The partnership was dissolved on 22 June 1840.  About this time the family moved to the Adelaide Hills and William established himself as one of the pioneer agriculturalists of South Australia.  William and Mary’s children, Caleb and Elizabeth were born in 1840 and 1843 and the family owned 48 acres of land in the Hundred of Macclesfield.

In later years, their son, William Jabez often related incidents associated with the early life of South Australia.  Since arriving in the colony in 1838, he had seen many of the ups and downs of colonial life.  Among the matters which he recalled was that at one period in the early history of the colony flour was £10 a bag and sugar could not be obtained at any price.  He remembered the laying of the foundations of Dunn’s flourmill at Mount Barker in 1844, an historic event in connection with the agricultural development of the State. 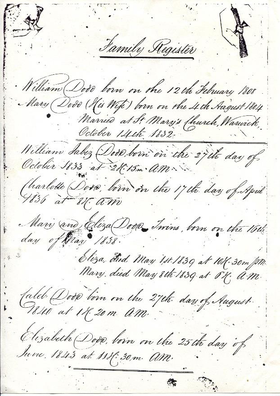 When the goldfields were discovered in Victoria, William, like many other South Australians, travelled overland to the Bendigo fields, where he remained for six months.  On returning to Mount Barker he acquired land, and with his father followed farming pursuits for several years.  He also followed the occupation of a teamster on the Mount Barker – Adelaide road. 3

William’s sister, Charlotte, a domestic servant, emigrated on the Trafalgar 4 and arrived in South Australia on in January 1849.  She was single (aged 32 years) but married that year.  An announcement appeared in the ‘Adelaide Times’ on 18 October 1849: ‘on 8th October, Joseph Smith, late of Broadway, Worcestershire, married Miss Charlotte Dodd, of Leamington in Warwickshire, third daughter of the late William Dodd and sister of William of Mount Barker’.

The Dodd family were devout Primitive Methodists (Wesleyans) and Charlotte gifted her brother a family bible, 5 which was used also as a family register.

On an 1850 register of landowners, William is listed as a trustee of the Mount Barker Wesleyan Methodist Chapel.  John Dunn who owned Dunn’s flour mill in Mount Barker was also a devoutly religious man.  In his memoirs he recalled that the Primitive Methodists had asked for a space in which to preach their sermons. Initially, he offered them the front room of his house on Sundays.

The first Wesleyan Church in the town was a slab hut built on land along Cameron Road near Dunn's mill.  Later, in 1851, the first stone church was built on land obtained for the purpose by the newly elected Church Elders.  This church forms part of what is now the Uniting Church Lecture Hall. 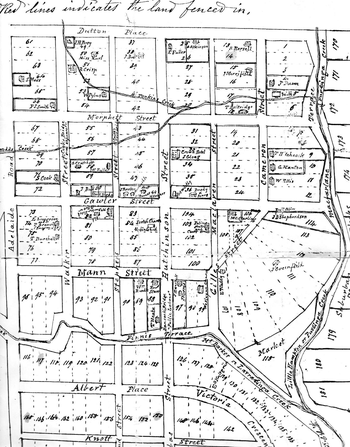 The South Australian Land Titles Office Pre Torrens systems 6 shows that William Dodd had owned Lot 69 and part Lot 68 Mount Baker. 7  From 1865-1871 William operated as a blacksmith with premises at Walker Street, Mount Barker.  The block was previously the site of a small schoolhouse.  The above plan of Mount Barker was drawn in 1851 . 8 William’s properties at Lot 68 and 69 Walker Street can be seen mapped, as well as John Dunn’s holdings (Lots 4, 5 and 6); and the Wesleyan Chapel (Lot 99).

The people of South Australia suffered badly through depressions in 1840s and 1890s.  Between these decades, incidents of fraud, liquidity crises and bank failures occurred and the gold rushes in New South Wales and Victoria in 1851 triggered an exodus of both people and cash from the colony.  Bankruptcy was a very common occurrence.  The normal mortgage rate at the time had been 10 per cent but up to 15 per cent was not uncommon as the financial situation deteriorated.  Unfortunately, William over-extended himself.  He borrowed £100 at 15 per cent for 2 years (1858-1860) and £33 at 15 per cent for two years (1859-1861) and could not manage the payments.  He became a bankrupt. 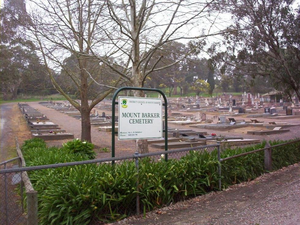 Photograph of the old Mount Barker Cemetery section looking up towards the fence line above Plot 103.On 5 January 1880, William died from paralysis, aged 72.  Although no gravesite memorial now exists, a Mount Barker cemetery map shows that his grave is in the old section near the top of the fence above grave 103.

Mary moved to be with her daughter, Bessie at Salisbury and became an active committee member of the Primitive Methodist Church.  Although 82 years old, Mary was reported as helping to raise £55 at the Salisbury Bazaar held on 10 February 1886.

Mary suffered senile decay and died in 1889.  ‘Dodd – On the 19th of November at Salisbury, Mary, relict of the late William Dodd, formerly of Mount Baker, in the 86th year of her age.  Colonist of nearly 51 years.’  Her passing is commemorated on a headstone in a graveyard in Church Street where the Salisbury Primitive Methodist Church once stood.

4  Your ancestors, Richard and Elizabeth Champion also emigrated on the ‘Trafalgar’ the following year.

5  In fact, there are two Dodd family bibles, treasured heirlooms belonging to the descendants of Ross Dodd who was formerly living at Stansbury, South Australia.