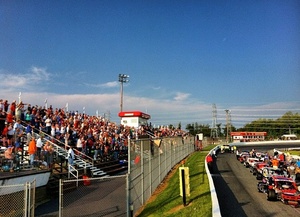 Ace Speedway is an ASA Member Track located in Altamahaw, North Carolina that provides entertainment for Alamance County members. The track itself is a 4/10-mile paved oval with a 12 degree banking in the corners and an average attendance of 45,000 people per season and 1,800 per race. This racing season runs from March until November, with Go Kart racing and special events, (click to view listing of events), running through December. The Friday night weekly program features Late Models, Grand American Modifieds, Limited Sportsman, Mini-Stocks, and an X-Treme Car division (an entry class that consists of passenger cars with a roll cages in them). Throughout the racing season there are exhibition classes like ISCARS Dash Touring Series sanctioned by ASA, Mini-Cups, Flat Head Fords, and Southern Ground Pounders. Touring divisions signed to compete at the track are the UARA late models, PASS Allstars, and Rolling Thunder Modifieds. Most races are announced by Tyler Williams, a 25 year-old announcer from Burlington, NC. In addition, Williams does a podcast called "The Ace Speedway Hour" which is a 60-minute radio show every Wednesday night that discusses current events with Ace Speedway. These podcasts can be accessed here.

Ace Speedway represents the history of stock car racing in Alamance County. Before the racetrack became known as Ace Speedway, it was called Southern Speedway. It was made in 1956 by Roy Maddren and was originally a 1/3-mile dirt track. In 1984, the track was expanded to 3/8-mile. By 1990, the track became paved under the ownership of Fred and Jim Turner and was deemed a NASCAR sanctioned Winston Racing Series member track.

A few years later, in 1999, David Morton became the sole owner of Ace Speedway. Under his ownership, the track underwent a large expansion and renovation. The track grew in size from 3/8-mile to 4/10-mile, the turns were banked to 12 degrees, and the pits were extended. In addition, bleacher boards were added to the stands to increase the comfort and safety of the fans.

Then, in August of 2006, Abraham Woidislawsky purchased Ace Speedway for $2.1 million dollars. As a former car mechanic turned real estate developer, Woidislawsky brought a new perspective to the business. His main goal was to attract fans to the racetrack by tailoring facility improvements towards them. To this day, Woidislawsky remains as the owner of the speedway.

Ace Speedway is a great place for the young and the young at heart. With each race, the area becomes loud with the exciting roar of engines and cheers from the stands.

FREE for Kids 6 and under.

*For special events such as touring series races, ticket prices may vary*

-Back Stretch Seating has Alcohol available for purchase