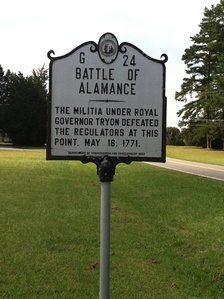 The Alamance Battleground State Historic Site is located at 5803 S NC Highway 62 Burlington and was the location of the Battle of the Alamance, “The First Battle of the Revolution. The site marks the positions of the Colonial Militia, commanded by Governor William Tryon, and the Regulators, commanded by James Hunter.  The “British”, marked by the red flags, overpowered the frontiersmen, causing the battle to be a significant moment  not only in North Carolina history, but also in United States history. 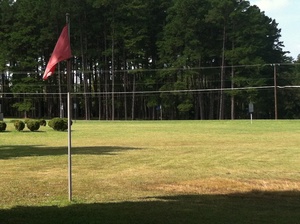 Colored pennants mark the positions of the combatants Photo:SeanMurphy

Much like their Northern counterparts, many North Carolinians were fed up with the way the colonial government was handled. More specifically, their complaints were of the government officials' corruptness, who were dishonest and levied unfair taxation. ​These officials, who were usually not elected but appointed by men in power. The frontier men living in the Western part of the state felt they were isolated and unrepresented in a government that favored the wealthier coast.

Initially the westerners, who organized themselves into an organization known as the “Regulators”, sought to bring reform through peaceful means. The Regulators made speeches, wrote petitions and correspondence to officials, and put on “advertisements”. The Regulators decided to take matters into their own hands when these peaceful protests failed to get any action out of Royal Governor William Tryon​. Violence, lawlessness, and terrorism replaced their diplomatic attempts at reform. When the government tried to stop them, the regulators remained defiant, refusing to pay taxes, disrupting court proceedings, and terrorizing administrators.

The Regulators caused two riots before the tension erupted into a battle. The first of these riots occurred in Hillsborough when a sheriff seized a Regulators horse and saddle for his failure to pay taxes. This angered the rabble-rousers, who entered the town, captured the sheriff, and took the horse and saddle back. The second riot occurred during a fall session of the superior courts in 1770. Tired of the corruptness of the judges, the Regulators disrupted the court proceedings and then held mock trials to illustrate how they wanted more representation in the court system. The rioters beat Judge Richard Henderson and Colonel Edmund Fanning, whose home they basically destroyed. 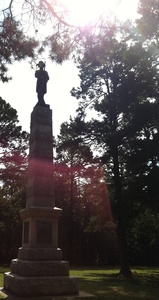 Monument to James Hunter, who led the Regulators in the Battle of Alamance. Photo:SeanMurphy

Fanning, one of the most corrupt officials in the government, was the register of deeds for Orange County and a militia officer and held a bit of clout with Governor Tryon. Because of this violent incident, Tryon and the Assembly decided that it was time to raise the militia to restore law and order in the western counties.

In March 1771, volunteers were raised and the militia, under General Hugh Waddell, was ordered to march to Hillsborough through Salisbury, while Tryon and his men took a more direct route. Waddell and his 284 men were challenged on their way to Hillsborough by a large group of Regulators and were forced to turn back. On May 11, the Governor and his 1,000 men took a break on the bank of Alamance Creek, while on their way to rescue Waddell. Just five miles away, a group of 2,000 Regulators were assembling.

The Battle of Alamance 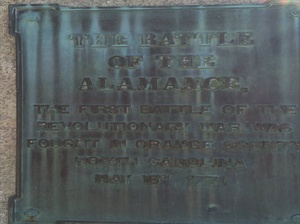 Tryon gave the Regulators one hour to disperse or be fired upon. Tyron’s messenger returned an hour later with the answer: “Fire and be damned!” The militia hesitated on Tryon’s order to fire but the Governor shouted, “Fire! Fire on them or on me!” And thus started the first battle of the Revolution. The Regulators, with their old muskets and makeshift weapons, were no match for the organized militia and their cannons. After boldly holding their positions in the open for half an hour, the Regulators retreated to fight in the woods for an hour and a half. Overwhelmed, the rebels fled, pursued by the militia for half a mile. Tryon’s militia lost nine men and had sixty men wounded, while the Regulators had an unknown amount of men killed in action, two hundred wounded, and twenty taken prisoner. While Tryon cared for the wounded, he forced the remaining Regulators to take an oath of allegiance to the royal government. Seven refused and were hung for treason, one of these defiant men being James Pugh. As he said before his execution, “Our blood will be as good seed in good ground that will produce a hundred fold”. 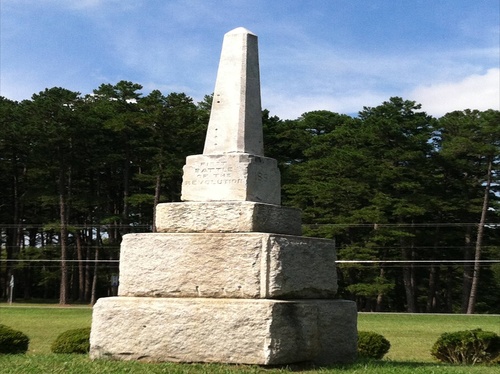 Pugh was correct - beginning in 1773, and during the Revolutionary War, the colony of North Carolina was without courts and beyond the rule of the Governor. The people followed the Regulators ideals and became a law upon themselves and corresponded with all of the other colonies seeking Independence. In 1774, “the first representative assembly, save of royal authority”, took place in North Carolina. The people assembled in open, flagrant defiance of the rule of the Crown and the Governor. On April 8th, 1775, the last ever Royal Legislative body met in North Carolina, being replaced by a popular assembly, with every county being represented. Finally, on April 12th, 1776, four months before the Declaration of Independence was signed, North Carolina became the first colony to declare Continental independence. 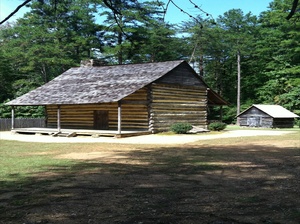 Also located on the site is the Allen House, a log cabin characteristic to the homes of the Regulators and other frontier people, built by John Allen in 1780​. Allen was the brother-in-law of Regulator leader Herman Husband. The house was moved to this site and restored in 1966, but it mains true to traditional dwelling of the time, with no windows (they got all of their light and air from the two doors), a main living area, a bedroom, two porches, a cellar for storing food, and a shed and garden in the backyard. 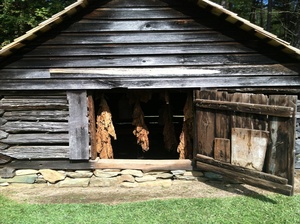 During the Alamance Battleground State Historic Site Colonial Living Week, there are a lot of hands on activities available for guests. Sights during the week include a colonial housewife cooking over an open flame, a doctor describing medical tools and procedures, a blacksmith working in a forge, and a woman making hand-dipped beeswax candles and a firing of a cannon. Visitors can also reserve a session from a schoolmaster, squeeze apples with a cider press, get a musket demonstration from a militiaman, and play with toys from the time period. 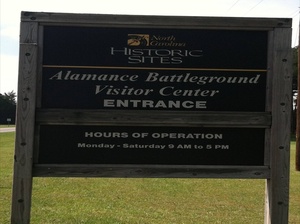 Visiting the site in person and taking photos and notes