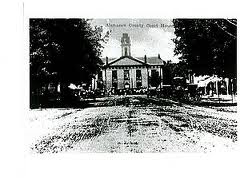 Alamance County was founded on January 29, 1849. Talks of building a county courthouse arose at the very first county meeting on June 4, 1849. That very same year on July 17, a contract of $8,000 was issued to construct a courthouse. Although the county contract allocated $8,000 for the project, the original courthouse was constructed for $6,400. The courthouse was intended to be the center of Alamance County and constructed south of Providence Church. The two-story structure was built with the help of local slave labor. At the top of the courthouse sat a 400-pound cast metal bell. This bell was the focal point of the entire building. The courthouse officially opened in 1852. It was used by local, state, and federal government and acted as a town center as well. After 30 years of abuse, the courthouse was in need of remodeling and received renovations in 1882, 1888, and 1889. During this time, the county added two additional wings to the structure and changed the outside switching from brick to stucco. One of the last additions to the original courthouse was a memorial statue for Confederate soldiers. The statue was dedicated on May 16, 1914 and is sponsored by the local chapter of The United Daughters of the Confederacy. The Confederate Monument is located outside of the Alamance County Historic Courthouse on the north side of the exterior. It is a single column mounted on a square base standing 29 feet high. At the top of the column there is a Confederate Soldier resting his rifle. The base and column were constructed out of granite and the soldier is carved out of Italian marble. The price of the monument was $2,100. Due to the growing size of the community, the county commissioners decided to demolish the original courthouse in 1923 to make way for its larger replacement. The monument still stands.

Work began on the new courthouse on November 17, 1923 at  1 Square Court located in the center of Graham, NC. William Arnold and James Lexie Moore are credited with digging the foundation while Harry Barton, a well-known architect of the area, created the design. While construction of the courthouse took just over a year, the cost of construction was $253,925.82. This cost is almost forty times larger than the cost of the first court house built 70 years prior. The reason for the large difference can be attributed to the change in architectural style. The new design by Barton pulled from the classical revival movement. Terracotta stonework and metal masonry floors are much more expensive. The new facility is a three-story building with granite steps built into the foundation on all sides leading up to every entrance. These features, combined with inflating prices and paid labor, are also reasons for the cost increase. Construction was finished and the courthouse opened on November 23, 1924. Not only did it house the court system, but it was also the location of the sheriff's office and other local government offices. In 1979, Alamance County Courthouse was added to the National Register of Historic Places, the official list of the Nation's places worthy of preservation. Since then, the courthouse has received numerous repairs to restore and preserve the building to its original appearance. In 1996 the building required $1.2 million to fix problems involving a leaking roof. In 2010 the courthouse underwent it largest renovation to date. $3,000,000 were spent to repair more water damage and improve the overall safety by removing harmful materials.  In 2011 the courthouse name was officially changed to Alamance County Historic Courthouse.

In the early 90s county officials were faced with a tough decision. The Historic Courthouse was plagued with problems and dangerous conditions and the officials had to decide whether they wanted to invest in renovations or build a new facility. Struggling to pick between the two they decided to go with both. In 1992 construction began on Criminal Courts Building located just down the road at 212 W. Elm Street. The new Criminal Courts Building opened on December 22, 1993. It is still operational today and handles all matters regarding traffic matters, misdemeanor cases, and criminal record/ background checks. This leaves all matters regarding civil court to the historic courthouse.

Today the historic courthouse houses three divisions: civil, special proceedings, and estate. Under the civil division, there are three types of courts. The Superior Court handles matters involving lawsuits over $10,000. The District Court handles matters that involve lawsuits between $5,000-$10,000.  The Small Claims Court oversees cases under $5,000. The Civil Division is also responsible for lawsuits regarding domestic relations, such as child support, domestic violence, custody, equitable distribution of property, alimony, and absolute divorce. The Courthouse also houses the Special Proceedings Division which handles cases of adoptions, foreclosures, and name changes among others. The Estate Division handles probates, guardianship, and trust matters.

Who Rules on These Matters?

David Barber was elected Alamance County Clerk of Court in November of 2010. Before that, he was still no stranger to the community. A native to Alamance, Barber went on to graduate from Elon University, known as Elon College at the time. He then went on to get his law degree from UNC. Before getting involved in local government, Barber worked as an attorney at his own private practice located in Graham, NC. He still calls Alamance his home and lives in Elon, NC with his wife. As the County Clerk of the Superior Court, he heads a staff of 8 assistant clerks and 34 deputy clerks, making a total of 43 employees.  The County Clerks Office lists the five main responsibilities for the County Clerk as a judge, record keeper, comptroller, administrator, and leader. As judge, the clerk has jurisdiction over all civil hearings. In regards to record keeping, the county clerk is responsible for filing all matters brought before the court in the Clerk of Court’s office. The duty of comptroller holds the Clerk of Superior Court accountable for investing and distributing funds that come from court related activities. The role of administrator means that the Clerk of Superior Court must perform tasks such as setting up court files and issuing subpoenas. The responsibility of being a leader means the Clerk must supervise and manage his employees.