Burlington, North Carolina is located in Alamance County and is the 17th largest city in the state. Residing in the Piedmont region, Burlington is home to 50,935 residents, according to a 2011 census from nchistory.edu. It is surrounded by major North Carolina cities such as Greensboro, Chapel Hill, and Durham, and is in close proximity to the state’s capitol, Raleigh. Burlington is home to twenty elementary schools, seven middle schools, and eight high schools for their residents to enroll in. When residents are not in school, they can enjoy watching the Burlington Royals, their local baseball team, at the Burlington Athletic Stadium. The Royals are an amateur affiliate of the Kansas City Royals and attract residents and guests of Burlington each and every season. If not watching a game, residents can participate in various recreational activities. Children and adults can participate softball leagues, soccer leagues, basketball leagues, and many others. Recreational centers are scattered throughout the city to be utilized by sports-goers.

Founded in 1859, Burlington served as a home to various groups of settlers. It was considered a major railroad town and boasted the name of North Carolina Railroad Headquarters. With this title, Burlington also was considered efficient in textiles, more specifically hosiery. But when a large fire burned a large portion of Burlington to ashes, it had to rebuild its industries. This fire devastated much of the city’s landmarks and establishments, but, after much effort, it was rebuilt and basically restored to its original configuration.

Today, Burlington still houses a major railway system with the Amtrack running right through its city streets. The city is still considered a large railroad and textile industrial center, but now can call itself an electricity power in North Carolina. In tying to the historical aspect of Burlington, a historical site, the Historic Depot, serves as a park that includes an amphitheater and multiple visual attractions for the whole family. Scattered throughout the streets of downtown are many other public attractions, such as May Memorial Library and Company Shops. May Memorial Library was once the U.S. Post office until it converted to a library in 1942 and is now part of the historical walking tour that Burlington provides to its guests. The Company Shops are considered the basis of the city and have been preserved since the city was rebuilt. These attractions have served not only the guests in Burlington, but its residents, as well. The population of Burlington continues to steadily increase; from 1959 to 1979, it increased fifty percent.

Even though the former city of Burlington is no longer in its prime condition, its preservation of historical artifacts and landmarks serve as a flashback to its early days. Many important governmental and entertainment buildings have been preserved and now offer as locations for historical walking tours.

Downtown Burlington, as pictured below, is located a few minutes east of Elon University and is right up the highway from Alamance. Its central location in the state of North Carolina serves as a beneficial aspect because it is the same amount of time both ways to the mountains and to the beach. Overall, Burlington has served, and currently serves, as a city filled with entertainment, recreational activities, and a rich, stimulating history. 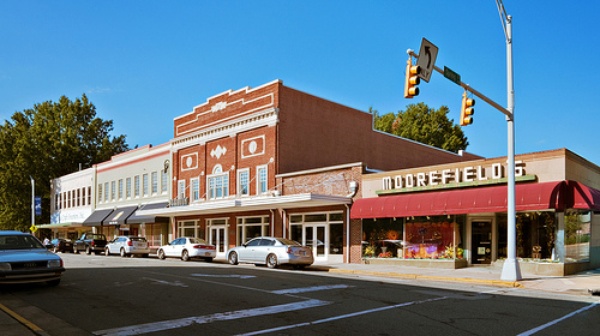