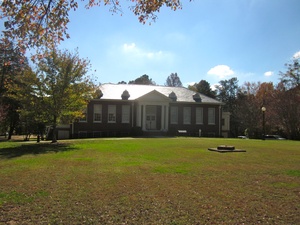 Charlotte Hawkins Brown was born a granddaughter to a slave in the year 1883. At the age of 17 she met and was greatly influenced by Alice Freeman Palmer to attend school and eventually teach. Because of this encouragement, Charlotte then established the Palmer Memorial Institute the following year in 1902. She created this institution, originally, to teach African American students different forms of manual and agricultural labors. However, very soon after its development, Palmer Memorial Institute developed into a respected preparatory school for its African American students. Throughout Charlotte’s 50-year-long presidency at the institution, over 1,000 students graduated from her prep school. The campus can still be visited and appreciated to this day because, in the year 1984, it was established as North Carolina’s first African American historic state site.

In the year 1961 Charlotte Hawkins Brown passed away and ten years later, in 1971, the school was shut down. First, most of the campus was sold to Bennett College and another portion was sold to the American Muslims mission. However, in the year 1982 a niece to Dr. Brown, Maria Cole, and her friend and fellow classmate at the Palmer Memorial Institute, Marie Gibbs, thought that preserving the school and all of the work Dr. Brown put into it would be a much better way to honor her extremely hard work and passion. The two friends discussed and came to the conclusion that they were both determined to have Dr. Brown’s contributions to the African American society during such a fragile time for this specific population recognized and honored by future generations. They wanted to do so by proposing that the school be recognized as a state historic site.

One year after their discussion, Senator William Martin of North Carolina ensured that the bill naming this institution as the state’s first African American historic site would be passed, and it was. Soon after the passing of this  bill many of its supporters formed the Charlotte Hawkins Brown Historical Foundation, Inc. and raised $400,000 for the restoration and preservation of the school building as well as its campus. With the money raised by this organization the heart of the campus, as well as one building created to be a visitor center for the museum, and even Dr. Brown’s home were able to be restored and furnished. The site that has been established today, opened in November 1987, is recognized as a memorial and commemoration to Dr. Brown and her amazing efforts at providing respected schooling for countless African American students.

Today, residents of Alamance County can easily access this historical site where it is located in Whitsett between the towns of Greensboro and Burlington. Upon arrival, visitors will be able to see the fully restored and furnished residence of Dr. Brown where she taught students how to entertain guests in her dining room as well as how to play many instruments, like the piano. Visitors will also be able to take a step back in time and take a walk through Galen Stone Hall, one of the student dormitories as well as the teachers’ dormitories. Among some of the museum’s other exciting sites is the old bell tower on campus. Once an individual sets foot on the historic site, they will undoubtedly be able to immerse themselves in the culture and time period to truly appreciate all of the efforts Dr. Brown went to make the dream of having a good education for many African American students possible.

Along with many of these historic sites, the museum has created panels outside of the buildings to inform visitors on the building’s history and relevance to the school. Handicapped and picnic facilities are also easily accessed at the museum. Tours also run throughout the week and are available upon request with no admission fee required.