City Park is Burlington's most extensive recreation area, located one mile from Downtown Burlington off of South Church Street. The 75 acre park is known best for its amusement area, which features the historic Dentzel Carousel.  Each September, over 50,000 individuals gather for The Burlington Carousel Festival for live music, crafts, food, and rides.  City Park has numerous amenities for any activity including picnic areas, a walking track, athletic fields, a concert pavilion, and even train rides!

City Park has a wide variety of attractions which include:

Reservation information for buildings and shelters, including options for birthdays parties can be found via this link: http://www.ci.burlington.nc.us/233/City-Park or by calling (336) 222-5030. 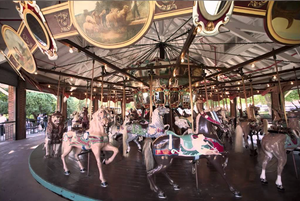 During the spring and summer, City Park hosts many fun events like baseball and softball tournaments, a concert series, and an Easter egg hunt. Upcoming events in 2017 can be found on the park calendar: http://www.burlingtonnc.gov/calendar.aspx?CID=45.

The Burlington Carousel Festival is a highly anticipated event that is held each September, which celebrates the city's historic Dentzel Menagerie Carousel. The carousel was built around 1910 by the Dentzel family in Philadelphia, Pennsylvania. In 1924, the city of Burlington purchased the carousel from Locust Point Amusement Park in Oak Harbor, Ohio, and it has since been fully restored. The festival attracts over 50,000 people each year, and it offers exhibits from fine artists and craftsmen, local live music, food, and rides on the Dentzel Carousel and other amusement attractions.