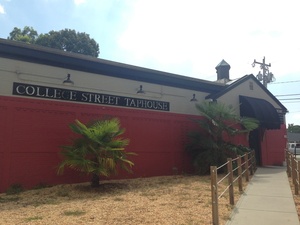 College Street Taphouse is an event venue located in Downtown Elon by Pandora's Pies. The building used to house the first bar in the town of Elon, but it became closed to the public on August 17, 2013 due to economic problems. When it was a bar, Taphouse was popular among both students and locals of the Elon community. It hosted concerts and other music events, as well as celebratory gatherings for those on the Dean's List. Now Taphouse is now a private event space available for use by Elon student groups. Various organizations, including fraternities, sororities, and varsity and club sports teams, rent this space for date parties, banquets, and other celebrations.

When the Taphouse closed in 2013, it wasn’t clear exactly what was going to happen to the space. The building was owned by Chris Russell, when the business failed due to financial troubles, it was decided that it was best for the University to use it as a place to host events for student groups, bringing in money for the school and providing a much needed private event space. At the same time that Taphouse closed, Town Table, a beloved restaurant also owned by Chris Russell, shut down as well.

Taphouse was one of Elon’s few bars, and it’s closing was a very sad time for some students. The college bar scene at Elon University was diminished to just West End and Fat Frogg. Currently, West End is only open as a restaurant, closing early ever since the new bar Tony’s came onto the scene. Fat Frogg often hosts trivia nights and open events, but neither fill the gap that Taphouse left in the college bar scene, a gap that many say is now being filled by Tony’s.

The ability to accommodate over 250 people

More information on fees, security, maintenance, or food and beverage can be found at www.elon.edu/e-web/students/activities/taphouse.xhtml