The Company Shops Station serves as Alamance County’s primary passenger train service. It was originally built in the 1800’s as an engine house, which provided space for maintenance on trains passing through town. The building sat unused for many years before the passenger train station opened for commercial use in 2003. It is located at 101 North Main Street in Burlington, North Carolina and is now open from 7:00 AM to 5:00 PM every day of the week. 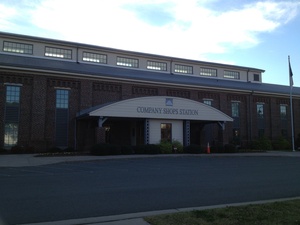 The modern station in October 2012.

The original Company Shops Station building was constructed almost 150 years ago. It still stands at 18,000 square feet and covers a 631-acre area of space. It was used as an engine house, which was a maintenance building for trains in need of repairs. It was founded because the Atlantic and North Carolina Railroad needed a centrally located location between Goldsboro and Charlotte. Before it closed for a period of time in the 1900’s, it was the location of many significant historical occurrences in the railroad industry.

In 1855, the first “iron horse” arrived in Alamance County. The term “iron horse” originated when horses were still powered most machinery in that time period. The invention of trains was comparable to an “iron horse.” This large train was deemed the Eighth Wonder of the World.

Between 1855 and 1860, the town of Company Shops was built around the engine house to provide items that the railroad service company often needed. Company Shops was later renamed Burlington in 1887. When Burlington was incorporated as a city, it worked to establish itself in an industry that would make use of the railroad connections through textile manufacturing. Textile manufacturing became a large success, so much so that Burlington began to call itself the “Hosiery Center of the South.”

In 1918, a fire destroyed many of Burlington’s historic buildings that were once Company Shops. Miraculously, the engine house was the only building that survived. The engine house remained unused for a number of years following the fire until the surrounding area was reconstructed, and the fire severely impacted the textile industry as well. 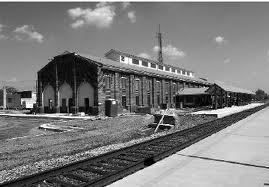 The station during reconstruction in 2003.

After sitting unused for many years, the building was renovated and officially opened for commercial use in 2003 by the name of the Company Shops Station. The renovated building houses the North Carolina Railroad Whistlestop Museum in its lobby, a notable attraction for tourists. It also houses other city offices, and a branch of the Burlington Police Department leases the top story.

The company responsible for the renovations was Moser, Mayer, and Phoenix, Architects, and they worked to design a layout that incorporated many architectural elements of the old engine house, yet fit the needs of the modern tenants. They kept the barrel roof of the building to recreate the form of the original building, and a baking soda solution was applied to the soft brick inside in order to take off the white paint. This revealed handmade detail in the walls that was not previously noticeable. The architectural company was applauded for their work on the station and received an Award of Excellence from the Main Street, North Carolina division of the State Department of Commerce. The reconstruction cost approximately $3 million total.

Amtrak, also known as the National Railroad Passenger Company, is now located inside the Company Shops Station and is used regularly by residents of Burlington and surrounding areas. It opened for commercial use in July 2003 and had a formal grand opening in August 2003. It is served by two passenger trains, the Carolinian and the Piedmont. The Carolinian runs between Charlotte, North Carolina and New York City, making stops at Kannapolis, Salisbury, High Point, Greensboro, Burlington, Durham, Cary, Raleigh, Selma, Wilson, and Rocky Mount. The Piedmont travels between Raleigh and Charlotte, North Carolina and stops in Cary, Durham, Burlington, Greensboro, High Point, Salisbury, and Kannapolis.

Amtrak, the National Railroad Passenger Company, is a for-profit corporation that opened on May 1, 1971 to provide commercial passenger service throughout the United States. It is headquartered at Union Station in Washington, DC. Although Congress said it would not be considered a federal government corporation, the United States Department of Transportation does own all preferred stock in the company. The Rail Passenger Service Act of 1970 established Amtrak. Amtrak also receives annual appropriations from the government. Amtrak came to Burlington in 2003 through the North Carolina Company Shops Station.

There are different classes of service on the Amtrak trains in Burlington. In sleeper service, customers can stay in a room with one or more beds that can accommodate an individual or a family. Business class provides amenities such as complimentary beverages or newspapers. Some business class seats are in designated sections of the train cars while other are separate cars themselves. The most common class of service in Burlington is coach service, which covers a basic train ticket. Reserved coach seating is always set in a two by two configuration and all ticketed passengers are guaranteed a seat, although seats are not assigned on the ticket. Unreserved coach runs in a first-come first-serve method of seating. This is generally only offered through some of Amtrak’s shorter and commuter-oriented routes. 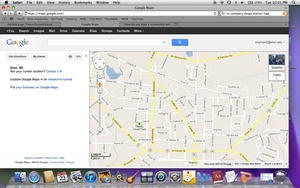 Whistlestop, a railroad museum is located in the only remaining original building of the Company Shops Station. Exhibits combine detailed narrative with life-size reproductions of trains as they would have looked coming through the engine house for repairs many years ago. Another popular exhibit is a to-scale model of the town of Company Shops, which is now the heart of downtown Burlington. Whistlestop is open seven days a week from 7:30 AM to 7:00 PM and special tours can be arranged upon request.