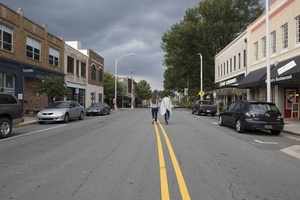 Downtown Burlington is located in Alamance County, North Carolina.  Burlington’s coordinates are 36.02 N latitude and 079 28W longitude, is 25.17 square miles, and sits 638 feet above sea level.  According to the 2011 Census, there are currently 50,925 people living in Burlington.

Western Europeans first settled Burlington in the 1700s.  In 1766, tension formed between the government and the people who lived in the area that would one day become Burlington.  The rebels, also known as the Regulators, were protesting against the state government because of excessive taxes and rampant corruption.  The Regulator leaders of this movement were Herman Husband and William Butler. Their primary target was Edmund Fanning, the colonial administrator at the time.  In 1770, Regulators stormed the court and the court made movements that they believed would settle the Regulators.  The court also passed the Johnston Riot Act, which said that the governor could use military force to break up any protest the Regulators had.  The Regulators fought the state for a few years and were eventually crushed at the Battle of Alamance.  Although their efforts did not pay off immediately, participants in the Revolutionary war used their tactics against Britain.

In 1858 and 1859, the area of Burlington was finally chartered and founded.  At this point, the town was given the name “Company Shops.”  It was the railroad headquarters of the area and had a few shops.  It was a main place of business, known as the hosiery center of the South and had many textile and agricultural industries.

In 1918, a large portion of downtown Burlington was burnt down in a fire.  As a result, many renovations to the city occurred in the 1920s through the 1950s.  Since then, not many renovations to the city have been made, as seen by the façade of stores and art work still hanging in them.  In 1925 a hotel was built so that businessmen would have a place to stay while they did their work.  Once the businesses started moving out of downtown Burlington, however, it was converted into a retirement home.  Eventually businesses started moving out of Burlington because of industry changes and expansions.  Although this area was once a huge business center, the streets are filled with remains of the past and it does not look like there are going to be any changes in the near future.

One major business that resided in Burlington was Burlington Mills, a textile mill.  Originally owned by the Holt family, Spencer Love bought it in the early 1920s after the Holt family lost interest.  The city of Burlington offered $250,000 to anyone who would come and start the textile mill because it was such an essential part of Burlington.  The mill became Burlington Industries and at one point was the largest textile maker in the world.  Although the mill flourished for a while, it slowly began to go under until Love started using rayon for bed sheets.  Business picked up for a while after that, but finally, Burlington Mills moved out of Burlington in 1935.

Another major business that was in Burlington was May Hosiery.  W.H. and Ben May first owned Daisy Hosiery and then founded May Hosiery in Burlington.  The company thrived for many years, closing in the 1980s.  In 2009, LabCorp bought the factory, but the smokestack from May Hosiery can still be seen. 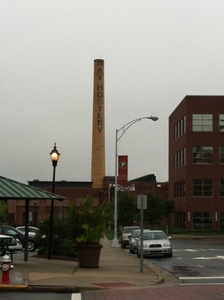 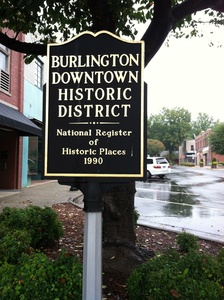 The Historic Depot, built in the mid 1800s, used to be the main train station for the business district of Burlington.   Since downtown Burlington used to be the a major railroad city, this was at one point one of the most important parts of the area.  In 1979, it was moved to its current location and is now a park like area with a museum that tells the history of Burlington through art and an amphitheater.  It also serves as a meeting place for the people of Burlington. 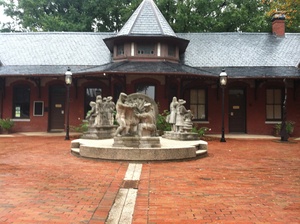 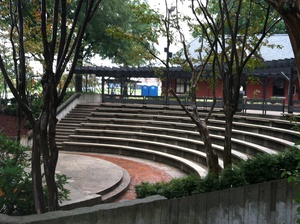 The Paramount Theater in Downtown Burlington has been home to various plays, meetings, concerts, and choirs since 1929.  It was renovated and reopened in 1998.  It is the home to the Paramount Acting Company and the Alamance Children’s Theater.  Paramount Theater currently seats 398 people.  Tickets can be purchased weekdays from 12:00 p.m. until 3:00 p.m. and one hour before any showing. 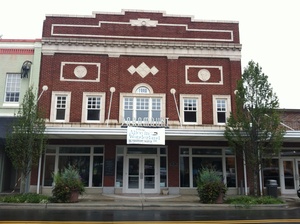 May Memorial Library was built in 1916 originally as a post office.  In 1938, it was converted from a post office into a library, acquired by Will May who in turn gave it to the city as a library memorial to his wife.  The building looks almost identical to how it looked to when it was built.  In 2000, it received some renovations and expansions.  It currently houses a section devoted to local history, including genealogy and a historical postcard collection.  It has many programs for young children and teens, such as story time, baby fun time, and various book clubs.  It is open Monday through Friday 9:00 a.m. to 9:00 p.m., Saturday 9:00 a.m. to 6:00 p.m. and Sunday 1:00 p.m. to 5:00 p.m. 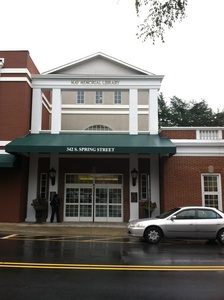 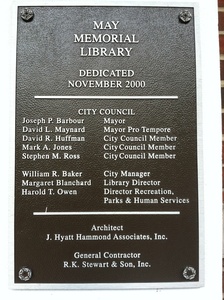 Other Activities and Attractions

The Blend & Co., located at 127 E. Front Street, offers ethically sourced and brewed coffee, smoothies, and tea. This coffee house serves a wide array of different specialty drinks, as well as pastries and small food items that are locally sourced. The Blend & Co. is open Monday - Friday from 7:00 - 8:00, and on Saturdays from 8:00-8:00. It is closed on Sundays.

The Municipal Building is home to Burlington’s government offices.

Visitors can see the Burlington Royals, the minor league baseball team that trains players for the Kansas City Royals.  They play in the Burlington Athletic Stadium.

One major event in downtown Burlington is the fireworks that occur on the Fourth of July and Halloween.  Visitors can see these from the hill in City Park.