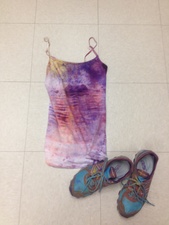 The Damage from the Color Run

Taking the classic 5k to a bright, new level, the Color Run is normally a race that tours to various cities and raises money for local charities. In order for the color to show up the best, runners or walkers arrive wearing white t-shirts and other pale garments; the runners start out as a blank canvas. Once the race starts, staff members throw colored powder on the participants at each “Color Zone”—every kilometer. The powder then sticks to clothing and skin therefore mixing various colors together. By the end of the race, each person ends ups a tie-dyed masterpiece.

The Color Run originated in Utah at the beginning of 2012. Competitive runner, Travis Snyder, staged his first running event—the Salem Spring Triathlon—and was a member of the team that created the Red Rock Relay in Moab and St. George. Snyder and his wife, an exercise science major, were trying to come up with ways to attract more people to an event, and the idea of the Color Run was born.

Over 250,000 people have liked the Color Run’s Facebook page within six months (currently at 597,600 “likes”), and fans are requesting this popular race to come to their respective cities. Twitter-wise, the run has acquired 23,816 followers. Because of its large fan base, the Color Run is the fastest growing race and one of the most beloved and demanded races in history. Since the run launched in January, over fifty cities have hosted the race and forty cities have already registered for the run to travel to in 2013. Hundreds of thousands have participated. Many often refer to it as “the happiest 5k on the planet”; participants are exercising with their family and friends and end up looking like a toddler’s paint project, why wouldn’t someone have a good time? Part of its success is due to its attractiveness and openness to people of all ages, sizes, and fitness levels. People are allowed to walk if they are not up to running. Kids under the age of six are allowed in for free, but if they are above six years old, they must register. Because of this rule many parents bring their children in jogging strollers or bring them to walk the course. Dogs are also allowed to accompany their owners to the event. This 5k is widely popular amongst new and moderate runners for its relaxed regulations and breaks in running every kilometer when the runners go through “Color Zones”. Even with the strong appeal to amateur athletes, many others, runners or not, enjoy the run as well because it’s a great, fun way to get some exercise with friends and family, and the money goes to good causes and charities.

The Elon Color Run, however, was not a part of the tour, and it was only about 3 kilometers (approximately two miles). ELONTHON and Campus Rec hosted this Color Run. ELONTHON hosts a 24-hour dance marathon every year that raises funds for Duke’s Children’s Hospital. Over 510 students participated in the run. The cost to run the trail was only $10 or $15 if one wanted a keepsake t-shirt to tie-dye after the race, and all of the proceeds went to the charity ELONTHON sponsors, Duke’s Children’s Hospital. Campus Rec and ELONTHON successfully raised over $4,000 for the hospital. Students enjoyed running on a beautiful day with their friends and laughing at how ridiculous they looked while showing off, maybe not their true colors, but some colors, nonetheless.

Elonthon and Campus Rec paired to host Elon's second Color Run on Saturday, October 5, 2013 near the intermural fields at Elon. The weather on this day was around 90 degrees, but the participants made the best of it, and enjoyed the day. Many students involved in other campus activities other than Elonthon or Campus Rec participated in the Color Run with their organizations. Accompanying Elon students on this day were some professors, and often their children. Many people fought through the intense heat and ran the length of the Color Run, while others alternated running and walking. As people crossed the finish line, covered in tie dyed clothes, faces and hair, there were buckets of water bottles for them to take. 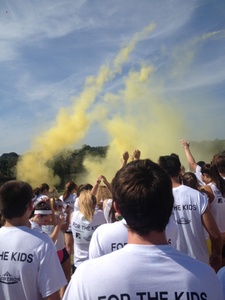