Elon University football is one of 17 Division 1 varsity sports offered at Elon.  They are a member of the FCS (Football Championship Subdivision) and now apart of the Colonial Athletic Association Conference along with Albany, Delaware, Towson, James Madison, Maine, New Hampshire, Rhode Island, Richmond, Stony Brook, Villanova, and William and Mary. 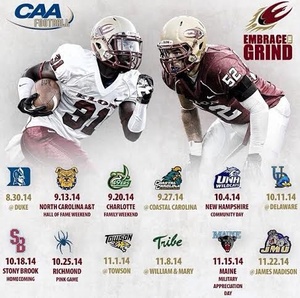 The New CAA Elon football Schedule for the 2014 Season 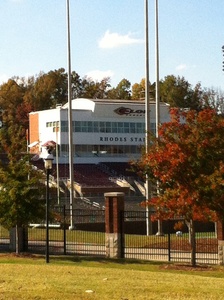 The location of home games for the football games is Rhodes Stadium.  Rhodes stadium is located on the north side of campus down N Williamson Ave.  Rhodes stadium was opened in 2001.  The surface of the stadiumis a grass.  The stadium was named after major Elon donator and trustee, Dusty Rhodes, and his wife Peggy Rhodes.  The actual address of Rhodes stadium 1 Stadium Drive, Elon, North Carolina, 27244.  Rhodes stadium max capacity of 13,100 people.  The first game in Rhodes Stadium was September 22, 2001 and it was a twenty-three to seven loss to North Carolina A&T.  Their first win in Rhodes was the following week against Gardner Webb University and the final score was twenty-seven to fourteen.

Elon football's debut season was in 1909.  They were originally under the mascot name, "The Elon University Fighting Christians" until 2000 when they changes their name to the Phoenix due to the 1923 fire on campus.