Elon has multiple divisions of soccer on campus: intramurals, club soccer, and men's and Women's varsity teams . Intramural soccer teams are teams that are formed by students that play against each other in a small tournament. This tournament starts in October. The club team plays against other colleges all around the area. They train two to three times a week for two hours on Mondays and Thursdays. The team usually plays on the weekends and their home games can be watched from the intramural fields on South Campus. The varsity men's team, plays in NCAA Division I conference. This category is the hardest collegiate competition throughout the country. The players train every day, both in season and during the offseason. They play in different states across the country and are defending conference champions.

Elon University Varsity Soccer is a Division 1 NCAA soccer program competing in the Southern Conference currently ranked number 21 in the nation. Since their conception in fall of 1972 the Elon Phoenix mens soccer team has ammassed 303 wins. Many of which coming behind current head coach Darren Powell who has been Elon's head coach for the past eight seasons and has facilitated much of the success of the Phoenix Soccer program.  The Phoenix won their Southern Conference for the first time 2011 winning the title again in 2012 the team has also participated in the NCAA national tournament for the past two years. This is an enormous leap from humble beginnings and a 1999 inaguary season into Divison 1 soccer. 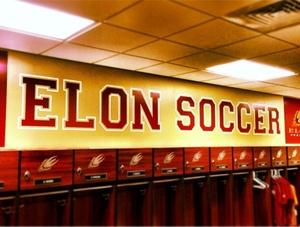 Elon played its first varsity soccer game in the fall of 1972 as the Elon Fighting Christains. After winning their first game, Elon lost in every other game of that first season. The first year head coach of Elon varsity soccer spent six season as the head coach to begin the building phase of this team. The 70's as a decade were a tumultous one for Elon soccer not having a winning season until 1979. The 80's and 90's witnessed a struggling Elon as well. The team wasn't predictable as they had winning and losing seasons for multiple years. Nevertheless, Elon rose through the ranks and by the year 1999 the team had entered Division 1 play. As was the case in the past Elon struggled at first in their new division but offered some seasons of promise. By 2005 Elon had attracted national  attention with the acquisition of an up an coming coach, coach Darren Powell. Coach Powell changed the dynamics of Elon mens soccer with a final goal of creating a national powerhouse. He himself played four years at UNC Greensboro and after his professional soccer career returned to coach. When he was hired to be the head coach of Elon, Coach Powell brought with him a winning attitude never before seen in the schools soccer history. He has since been named the Southern Conference coach of the year 3 times and has proved to be an invaluable piece to Elon uprise in Varsity soccer.

The Men's team had an outstanding year. Elon had been ranked in the top 25 for the entire season and knocked off such formitable opponents  as Wake Forest ( Formerly ranked 9th). The Phoenix finished with a record of 15-5-3 which led them to a berth to the NCAA tournament spot for the third year in a row. This years Varsity soccer team had a talented roster with strong upperclassman talent and promising young recruits.  This is partially due to the maroon and Gold's new found tournament success. Current freshman Rett Webb mentioned Elon's past two conference championships among his deciding factors to play for the Phoenix, "After seeing what Elon has done in recent years and seeing the talented players that have come out under Coach Powell, it was an easy decision to come to Elon and become a member of a winning program". Elon soccer also has athletes from four different continents one of whom a South American Native, Brazilian to be more accurate, Cauê Da Silva.  When asked about this season the  sophomore forward calmly said, "This is a program on the verge of becoming national champions, we have improved year to year and continue to improve. We know the hard work it takes to get to the top and now it is our time".  This confidence is something that has been gradually gained as the Elon Phoenix have won essential games this season and proved themselves every week.

Elon’s women’s team has made its own appearance in recent years. In the 2012 season the women made it in to the conference tournament and shocked the fans by making it to the semi-finals. The best season the women have yet to have, happened in 2013 finishing with a record of 13-3-6 overall and 5-1-4 in conference. The women finished second in the conference and had a devastating loss in the finals to Furman. Their Ratings Percentage Index (RPI) for the first time ever broke into the top 100 and at the end of the season the women were ranked 74th. Next year Elon moves the Colonial Athletic Association, which will challenge all of the teams.

Steven Kinney- After starting in over 40 matches for the Phoenix and recieving numerous recognitions and rewards including first-team Scholar All-South Region honoree as well as a second-team University Division NSCAA/adidas Men’s College Scholar All-America team honors. Kinney graduated Elon University with a degree in accounting in 2009 he was then drafted with the 45th overall pick in the Major League Soccer( MLS) super draft by the Chicago Fire. Where he has started for the past 3 seasons. Kinney was the first Elon soccer player to be drafted into the MLS.      https://twitter.com/StevenHKinney

Chris Thomas (#20)-  Senior forward at Elon University in 2012. Thomas is Elon's all team leader in points. Two-time Southern Conference Player of the Year in 2010 and 2012 .Hermann Trophy semifinalist and NSCAA All-America second team in 2012 . Scored school-record 53 goals in 81 matches in his four-year career at Elon, including 23 goals in his senior season earning him recognition as the nations leading goal scorer. Southern Conference Freshman of the Year with 10 goals in 2009. Thomas was selected fourth overall in the second round of the MLS superdraft by the New England Revolution.

Honorable mention: Gabe Latigue 2012 graduate who was drafted 63rd overall by the New England Revolution in the MLS super draft.