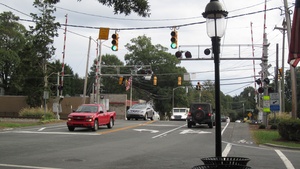 Alamance County is located in the central northern section of the U.S. state of North Carolina. "Alamance" is supposedly derived from the Indian word meaning "blue clay", from the Alamance Creek.​ This county includes the city of Burlington and Elon, among others.  With a population of 153,291, this county was established in 1849 from Orange County to the east. Alamance County has been the site of significant historical events, as well as a hugely vibrant textile industry.

The county of Alamance is home to a great deal of rich history. It gains much of this historical significance from the American Revolution. The Revolutionary Era began in 1763 when colonists in America began to feel that they lacked elected representation in the British parliament. As a result, an upheaval began in the thirteen colonies that lined the Eastern American shoreline. This was a revolution against the British Crown. Alamance County, as well as the mid-Atlantic in general, stepped into the revolutionary spotlight in 1778, when the war shifted from the North to the South. Alamance County, which was previously the western portion of Orange County, sent troops to fight in the war, some of which fought on the side of the revolutionaries and some of which fought with the British. Most of the battles were fought in South Carolina, however when British General Cornwallis pursued the General Nathaniel Greene's American Army, north troops crossed Alamance Creek, the creek from which Alamance County found its name. The battle of Lindley’s mill was fought in Alamance County on September thirteenth, which was the bloodiest battle in Alamance County history with nearly 300 out of the 900 participants killed. This battle was an attempt by the Colonial army to rescue the captured Governor, Thomas Burke. The militia was defeated and the British escaped with the Governor. Although this battle was lost, the colonies soon gained their independence from the British crown and a new country was born. Locals say that this rich history helps define who they are as people. “Knowing that a huge revolutionary battle was fought right in my back yard gives me a lot of pride. I am proud to say that I am from Burlington. I think that what those soldiers did for my freedom today is something very courageous. Not something you see everyday”, says freshman from Alamance County, William Mullikin.

Alamance County was also inevitably plagued with slavery. Its inevitability comes from its location in the south. In 1860 it was recorded that 520 of the 883 farms in the area were home to slaves. Some farms housed as many as five. About thirty-three% of the Alamance County population was not free. This inequality is what spurred the conflict between the North and the South. The northern states believed in freedom and equality for all, while southern states felt slavery was necessary. The South thought this conflict was a direct attack on their largest industry at the time, agriculture. In March of 1861 a vote for secession was held in North Carolina. The majority of Alamance County voted against secession and a few months later North Carolina joined the Confederate States. Over 230 men from Alamance County alone were killed during the civil war. As a result, the county became a hotspot for resistance to the Confederacy in the form of the Heroes of America. This group helped hide  “draft dodgers”, those avoiding being drafted for war. Toward the end of the warm many important battles were fought in North Carolina. The largest of these battles was the battle of Bentonville, N.C. just south of Raleigh. As the war came to a close, so began the reconstruction era. The mills that were in place provided many jobs, however the Southern economy was in shambles. There was much bitterness and regret throughout the South. Many of the citizens were angry, and as a result, secret groups began to appear, one that was noted before was the Heroes of American or the “Red Strings”. This instability however gave way for much growth in the following centuries. 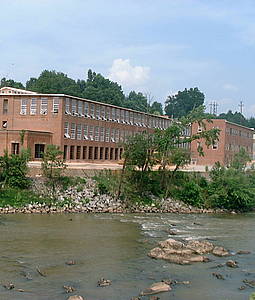 Alamance County historically has been famous for its textile industry. Even prior to the civil war, mills were the industry of Alamance County as well as many other areas within the state of North Carolina. This massive industry needed a massive labor force behind it, which lead to the creation of hundreds of thousands of jobs. This industry was even resilient during the Long Depression between 1873-1897. Many of these mills were powered by the-at the time—traditional, water power. Shortly after, many of the mills began to use electric power when these advances in technology became available. This source of power powered the mills all the way through the 1800s. Many of these mills were textile mills and were housing some well-known names. The Alamance Plaids from the 1850s were developed in these mills and were a very popular commodity up until the end of World War 2. Housing, towns, and cities were built accordingly with the high demand for labor. In order to connect these springing cities, railroads were built. The North Carolina Railroad had been purchased by the Richmond and Danville Railroad and was repaired in order to transport goods and people. Although many, if not all, of these mills are currently run down and closed, they provide an area for growth and opportunity, just as they had in the 19th and 20th centuries. They serve as a means of tourism and a new opportunity for business. (expand a little on this)

Encyclopedia of the American Civil War by James M. Mcpherson