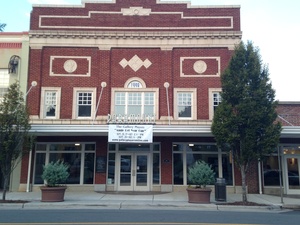 A look from the outside (Photo Courtesy of Jack Greenwald)

North Carolina's Paramount Theater is located at 128 E. Front St. in Burlington, NC. When the theater originally opened in the heart of Burlington in 1928, the Paramount Theater stole the hearts of many Alamance County residents, which gave reason to many to fund the renovation and reopening of the theater on February 18, 1998. The Alamance County Arts Council and many corporate supporters helped re-establish the Paramount Theater as one of Alamance’s landmarks. The theater now is home to a variety of events such as plays, musicals, concerts, community meetings, and classic movie showings. The theater’s architecture involves an art-deco motif that celebrates the style of the late 1920’s. It holds 329 guests, comfortably, allowing each audience member to enjoy the array of performances held at the Paramount. In addition to the standard audience member, the theater also has plenty of space for handicap members as well. The structure of the building provides for a pastoral atmosphere, but the staged productions are not a reflection of this. The theater is located on a busy street with plenty of parking in the surrounding areas.

The Paramount is home to The Gallery Players, a community theater group in Burlington, North Carolina. The group was started in 1971 by the president of the Alamance County Art Association, Catherine Moser. In 1977, the group began renting the Paramount Theater as a performance space and in 1985, the City of Burlington sold the Theater to the Gallery Players, under the conditions that the players would continue to refurbish the antique theater. In 1995 the Burlington City Council spent $1.8 million to restore the Theater. Many groups, including the Alamance County Art Association, Burlington City Council, Elon University, and the Gallery Players, all strived to raise money for the revival and restoration of the historic theater. In 1998 the Theater was reopened and once again became an addition to the city of Burlington as well as the home of the Gallery Players. People still have the opportunity to support the Paramount theater today through donations. You can dedicate seats, sponsor the theater, and even volunteer. The Paramount still stands and remains a beloved monument of Burlington, North Carolina.

In addition to the Gallery Players, the Paramount is also home to numerous other acting companies, including The Paramount Acting Company (PAC), Plain Players, Arts Alive, Teen to Teen, Studio One, and the Alamance Children's Theatre. The PAC is another prominent company that regularly performs at The Paramount. The company is sponsored by the City of Burlington and the Department of Parks and Recreation. The PAC choses talent from all around Burlington and the state of North Carolina. It puts on at least two summer productions each year. The company was founded shortly after the remodel of the Paramount in 1998, and has since then put on about 30 different shows, including comedies, dramas, and original musicals.

The Paramount Theater was built in the early twentieth century and has a great amount of history accompanying it. The monumental Paramount Theater originally opened on December 19, 1928 by J.R. Qualls. Qualls initially named the theater the Grand Theater but a year after the Grand's opening, the name was changed to The Paramount, a name that has now stuck for over eighty years. The first show to be played at the theater was titled Three Weekends, with admission being only 35 cents. The entire city was in an uproar of excitement about the grand opening of the new theater, and "The Grand Theater had to turn people away from its opening night showing." Patrons of Burlington were shocked to have such an elegant theater in their midsts. The classical style and fancy chandelier reflected the "Golden Age" of movies. It was described as a "picture palace for picture patrons."

The Paramount continued on to remain a staple in Burlington's society. The theater has been an elegant house of entertainment over the years. The Paramount provided a five piece orchestra for music during the years of silent film. It was a fantastic display of the cinema all throughout the Great Depression of the 1930's, and continued its success throughout World War II. In the 1940's the Paramount used its success to upgrade both the technology, with the exciting introduction of "talkies" into the world of film, and the style of the theater, transforming the majestic building from its originally classical style to the current art deco look it remains with today. However, The Paramount began to face its demise during the 1960's and 1970's along with the rest of Burlington. The theater as well as the charming town's glory began to fade. This period brought on hard times for the theater and the high status and respect it once had has almost completely disappeared. The Paramount was scheduled to be demolished in the 70's, but with the 1993 renovation the Paramount is here in Burlington to stay. The Paramount remains the only surviving cinema out of four originals from the historical city of Burlington. 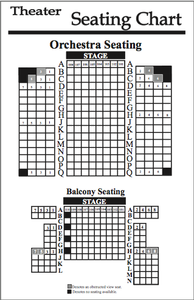 Seating ChartThe Paramount has one stage with the dimensions of 25'x22' allowing the 390 attending patrons to be able to enjoy their show.  There are various types of lights, microphones, and sound systems that help the shows being produced attain maximum enjoyment from the audience.  The theater notes that the right stage wing has limited space and slightly obstructed views.

The theater is universally accessible to everyone with the wheelchair accessible entrances.  There are eight locations dedicated to those in wheelchairs so that they too may enjoy the shows hosted in this historic theater. For those with impairments of hearing the theater offers four devices that can help the patrons hear the shows hosted in the theater. The same number of devices are provided for the visually impaired.