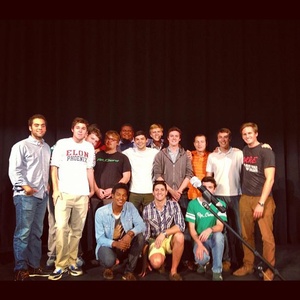 Elon University’s all male a cappella group, known as Rip_Chord, was formed in 2006. Since then they have been making a name for themselves all over campus and in the Elon community. The group is made up of 17 unique individuals who have a passion for singing and performing. Even though they haven’t been around very long, Rip_Chord certainly hasn’t wasted any time letting people know what they are about. They have already put out three CDs, two of which have been released in the last four years. Their most recent CD, Baby Back Rips, is now available for purchase and contains a mix of top 40 hits arranged for a cappella. Some of these hits include, Some Nights, It Girl, and Larger Than Life. The a cappella group is a great way to get involved in music without having to study it through college. Only one of the members of Rip_Chord is a music major. They practice three days a week; Tuesday and Thursday from 7:00-9:00 p.m. and Sundays from 3:00-5:00 p.m.

To be considered for the group, there is an extensive audition process students must go through. The sign ups for auditions can be found at the organization fair held at the beginning of each school year. The auditions then begin on Saturday and run from 10:00-5:00. Each auditionee must bring a verse and a chorus to sing. After their song, auditionees will also be asked to sing some scales so the executive members can hear range. Once the day is over and auditions are done, the executive members of the group will pick the people they wish to call back to sing again. At the callbacks, the person auditioning will get a chance to sing with the group and get a feel for the dynamics. This will also give Rip_Chord a chance to hear how the person blends and fits with the group. Rip_Chord is a really close group of guys so it is important that the person auditioning would make a good addition to the group. After the callbacks are done, the group comes together to deliberate on their choices for new members. This process is very important and can take hours to decide. Once everything has been organized and decided, different members of Rip_Chord will call the new members to let them know that they have made it into the group. All in all, it is a very selective process and only a few people make it in.

A normal day of practice for Rip_Chord begins with a warm-up. They have a fun tradition of doing a warm-up that was created by one of their alumni. They also do a few other vocal exercises in order to not strain their voices. Since they have such a large repertoire of music from past and present, it is important that they workshop their music to keep it in their heads for performances. They will workshop for about half and hour in order to make sure they really know them. After reviewing, Rip_Chord will go over new music or work as a group to iron over rough spots in different songs.

Songs are picked as a group by combing through the top 40 hits or just finding songs they like and can all agree on. Once a song has been picked, they will either arrange them themselves or send them off to be professionally arranged. About half of their songs have been arranged by the group and the other half are professionally done. Once that process is done, Rip_Chord has to begin learning the new song. This is done by splitting up into parts and going over the song section by section. They will then come together and sing what they have learned so they can hear how it sounds as a group and find out what they need to work on. Then comes the choosing of the solo. In order to figure out who gets the solo for certain songs, the guys have to audition for the part. People wanting to audition are told what part of the song they have to sing and then they practice it. Everyone who is auditioning sings it together a couple times to get a feel for it and then they get up in front of everyone and sing it individually. The people who did not audition will then deliberate amongst themselves. They will have callbacks to hear some people sing one more time. They will then make their final decision.

Rip_Chord has their fall concert coming up on Saturday, November 3 and they will be singing 14-15 songs. Tickets are $5 for students and $8 for general admission. You can purchase your tickets in Moseley from 10:00-2:00 everyday through Friday November 2. Tickets will also be available at the door.