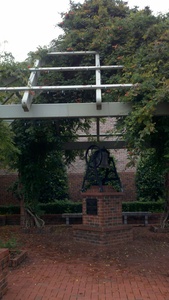 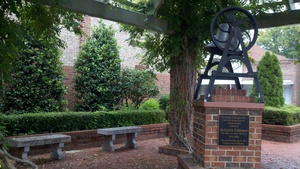 Sesquicentennial Park is a small gazebo-like park in Graham, North Carolina.  It is very small, only 2,500 square feet, with no grass or open space.  Sesquicentennial Park has a brick floor, benches, flowers, and a commemorative bell in the middle. The bell that is on display in the middle of Sesquicentennial Park is the original Court House Bell of Alamance County.  The Bell is owned by the Crissman family, but is loaned to the park.  Other than the bell, there are stone benches around the edge of the park with flowerbeds.  There is no ceiling, but vines covering the bell.  The vines not only make the park more aesthetically pleasing, but also have some practical uses.  This allows natural light and some elements to come into the park, but provides shade and some relief from rain. The park is located on a traffic circle in downtown Graham, so there are some city noises, but the background sound is not overwhelming.  The location is also very convenient for a quick stop, but not a long stay. The term park may be misleading, but Sesquicentennial Park is a nice, picturesque stop and can be relaxing.  Overall, Sesquicentennial Park is a pretty, relaxing stop, but is not what I was expecting when I thought of a park.