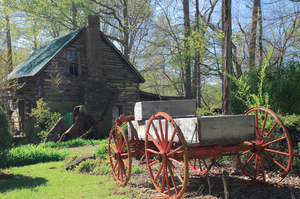 Snow Camp is referred to as a “dot in the road” by author Timothy Allen who wrote the book, Snow Camp North Carolina, but despite this notion Snow Camp has a spectacular history. The history of Snow Camp is brought to life daily by the Snow Camp Historical Society and Snow Camp Outdoor Drama. The drama department hosts two feature productions every summer, "The Sword of Peace" and "The Pathway to Freedom", as well as the productions of the Children's Theater that has hits such as "Puss and Boots" and others that run all summer long. It is safe to say that the theater and the historical society are a complete success, with its ability to engage adults, children, and families in the area, and teach them about events that occurred on the very land where they live. And while Snow Camp may just be a “dot in the road” there is much that has occurred here and there is much to be learned from it. According to Timothy Allen some of the stories to be told about the area include; the Quakers migrating here in the 1700s, General Cornwallis staying the night after having fought the battle at Guilford Court House, safe houses on the Underground Railroad, a famous hanging, and lots of mills in the area, one of which is still running. The Quaker values, customs, and ideals, still live on at this magical place, and is always a tourist attraction during the warm months with its extensive grounds filled with historic buildings, a museum, and even an ice cream shop, there is something there for everyone to enjoy.

250 years ago, the Quakers migrated from the North to Alamance County, for newer and cheaper land as well as religious reasons. They settled in a large area by Cane Creek near where the theater resides today. Every month they would hold a meeting, which came to grow exponentially over time, having members traveling great distances just to join in. This collection of people came to be known as the Cane Creek people, who defined themselves as being opposed to war, good business men, and were blessed enough to have access to many goods because of this. Because of the Quaker influences they were strict in social customs and it was common for people to be shunned or disowned if they did not obey the social norms. Some of these included excessive eating, drinking, smoking, and everyone was expected to dress plainly without any excessive decoration on the clothing. The third meeting house burnt down in 1879, and the brick house that replaced it also burnt down in 1942. The name Snow Camp, according to Timothy Allen, is said to have come from either the story of two hunters who got caught in a snow storm and survived or when General Cornwallis stayed overnight at the home of Simon Dixon in Greensboro and on his way back to Fayettville stopped over in (what is now) Snow Camp where it snowed while he was here, thus giving its name. Two minor American Revolution battles occurred in Snow Camp and it also was a place for runaway slaves during the time of the underground railroad. There were at least four safe houses in the town, one of them including the Quaker meeting house.

The Snow Camp Historical Drama Society was founded in 1971 with the purpose of popularizing the heritage of the Quakers in the town and the surrounding area. In 1972, the James Wilson and his brother Bobby decided to build the Wilson Amphitheater (on the banks of the Cane Creek), deciding that outdoor historical drama was the best way to use the society and enrich the community. They knew that they could have just as easily built the theater in the nearby city of Burlington, but decided that the rural setting is what makes the experience special. There is a rich history, and while you are watching the plays you were sitting where the Quaker’s had once sat.The first of plays to be put on at the theater was the William Hardy play “The Sword of Peace”. The play accounts the life of Simon Dixon (who is considered to be the founder of Snow Camp) and how the Revolutionary War took a toll on both him and the town. There are often live animals on stage throughout the play and even a canon fire at a few points during battle scenes. Another featured play “The Pathway to Freedom” tells the story of people who had helped slaves escape from the South up to the North in the 1840s and 1850s. Both feature music and dance throughout the plays. A Wilson family member was featured in every show, James Wilson was even the general manager and even his wife worked in the box office selling tickets. “The Sword of Peace” is now in its 40th season and “The Pathway to Freedom” is in its 20th season. The cast held 70 people this year, with 16 of those being full-time actors from the Outdoor Drama instituted. James Wilson has recently passed but he said himself, “theater goers can expect to be entertained, enlightened, and educated." The theater productions are loosely based on actual events, however they are mostly dramatized.

The Children’s Theater and Other Attractions

In 1980 a Children’s Theater was added into the mix which features plays such as “Puss in Boots” and “The Real Story of the Three Little Pigs”. The Historical Society also has annual Youth Drama Camps, The Molasses Fesitval, and even a Farmers Market every Wednesday from May to August. It is also a full time job just maintaining the grounds and restoring any of the buildings as needed. The Floyd McBane Museum is a new addition this year which features information about the history of Snow Camp. Tourists can take tours of all buildings and the grounds and even visit the ice cream shop and restaurant on site, Ye Old Country Kitchen. Overall, there is something for everyone at the Snow Camp Historical Society.

The Sword of Peace and Pathway to Freedom: 8 o'clock PM Thursday-Saturday evenings June through August.

Children's Shows: Wednesday evenings at 7PM and Saturday mornings 10 AM.

For more information check out this YouTube promotion made by the people of the Snow Camp Historical Drama Society: http://www.youtube.com/watch?v=LiuuVJTgC54#t=15

James Wilson the co-founder of Snow Camp Outdoor Drama died suddenly on September 5th 2013. In memory of his life and accomplishments, his wife, Louise Wilson, has created a fund in order to create a monument in his name and keep the theater program going, for it was his passion.

"Wilson, who put 'blood, sweat and tears' into theater, dies" By Chris Lavender