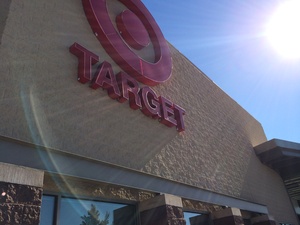 Overview- What is Target?

Target is a large American retailing company that carries clothing, shoes, jewelry, health products, electronics, bedding, kitchen supplies, toys, and more. Subsequently, Target is known to be a "one-stop shop for everything." Many new locations include a Target pharmacy, Photo shop, Starbucks, and/or cafe. The company even offers credit qualified guests through its Target Visa Credit Card. Their are 1,778 stores in the 49 states, and the company owns 3 distribution centers in Canada.

History- Where did it start?

The Target Corporation was founded in 1902 by George Dayton in Minneapolis, Minnesota. After Walmart, it is the second largest discount retailer in the United States. The first grand opening of a Target store occurred in Roseville, Minnesota. The store soon spread to many additional locations throughout the state and eventually the  country. The store was not actually called "Target" for quite some time though. It began as Dayton Dry Goods and once the company really started to take off, it was renamed a discount chain store with the name Target in 1962. It's first distribution center was built in 1969, and by 1975 Target was the number one revenue producer of the Dayton-Hudson Corporation. The Daytons themselves retired from the business in 1983, marking the first time the company had not been directly run by the Dayton family, but the company did not falter because of it. Target went on to become one of the world's leading chain discount stores.

Target has stores all of the United States. Therefore, it is no surprise that there is a Target nearby. There is one Target in Burlington, and three more in nearby Greensboro.  The Target in Burlington has great business because it serves the residence of Alamance County , as well as many college students from Elon University. Elon University students can get to Target by driving or taking the university’s Biobus service.

The Burlington Target sells clothing, school supplies, furniture, fresh groceries and more.  It includes a pharmacy and Starbucks as well, attractting more customers to the store and providing an even better shopping experience. Another attraction of the Burlington Target is the dollar bin in the front of the store, which is very useful for broke college students and other residents of Alamance County who are trying to save money. Target is open Monday through Friday, 8 am to 10 pm, Saturday from 8am to 10 pm, and Sunday from 8am to 9pm. It is located on 1475 University Drive in Burlington, NC and can be reached at (336) 524-9354.