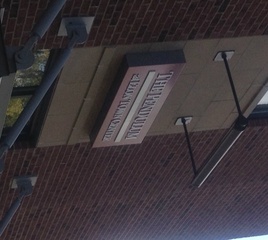 Every extraordinary university has an extraordinary newspaper; Elon University is no exception to this theory. On Wednesday mornings, Elon’s award-winning newspaper, the Pendulum, is distributed throughout campus. Replete with news about both on-campus and off-campus happenings, the Pendulum is an excellent source of information for professors, students, and staff. Serious and light-hearted, fun and informative, Elon’s newspaper is noteworthy in the community and sets a standard for newspapers all over the country.

The birth of the Pendulum occurred on October 14, 1974. With the financial aid of the Student Government Association, the pilot publication was an instant success, capturing people’s attention and leaving them eager for more. At this time, there were a mere six editors, twelve reporters, and one typist. The office, which held only one art table and one typewriter, was in the Long Building. Deborah Cochran acted as first editor-in-chief, while Mary Ellen Priestly held the first advisor position.

In 1978, the Pendulum went from a biweekly paper to a weekly paper. In 1981 it increased its length to six pages. The purchase of a Macintosh computer in 1989 made an eight-page paper possible and the addition of photographers, advertising staff, and a cartoonist upped the credibility. By the year 1998, the Pendulum’s crew was made up of ten executive editors, eleven reporters, and four photographers.

Today, the Pendulum resides at 130 North Williamson Avenue, where it moved to in fall of 2007. A cozy workshop for writers, its spacious environment allows for maximum productivity and creative flow. At the beginning of the year, an informative meeting was held where the current Pendulum editor-in-chief, Caitlin O’Donnell, spoke of the Pendulum’s goals and what their objectives are in printing the newspaper. Her passion and enthusiasm was infectious, not only for the rest of the editors, but for all the aspiring reporters in the room as well.

The editorial staff, which has expanded past the original nineteen, was welcoming and eager to answer all questions new reporters had. Each staff member set up a “station” in the office at which they explained their forte and what topic they mainly wrote about. The newspaper is broken down into six different segments: news, sports, opinions, international, style, and extras. Each of the segments has a lead editor who looks over each of the stories and determines whether it is printed or published electronically on the Pendulum online. The Pendulum is unique in that it attempts to make sure all reporters are credited and able to have their stories published in one form, even if that is not in the tangible newspaper.

The web presence of the Pendulum, which had arrived 28 years after the initial creation, would be redesigned in 2009 and again in 2012. Online, one can access the print edition to the Pendulum. The internet has invented unlimited possibilities, including access to all previous editions of newspapers as well as extra items that would be impossible to feature otherwise.

The ‘Blogs’ feature is one of these specialties. It allows for an expanded opinion on every article that has been published. Even the people who are not reporters or cannot commit the time to actual reporting are able to voice their opinion and publicize it to anyone who accesses the blog. Things like sports, which often require only simple blurbs rather than full articles, are kept updated on the blogs page. Not only are Elon sports talked about, but major league sports as well. On September 28, an Andrew Wilson created a blog entitled Rookie Magic has Oakland A’s Thinking Playoffs, while a Zachary Horner chatted about an Elon football preview. It is an ingenious mix of both real world and “Elon bubble” news.

Along with blogs, The Pendulum strategically uses social media sites to its advantage. Social media such as twitter and Facebook has allowed the newspaper to branch out, reaching audiences beyond its original capabilities. Not only is it good advertising, but readers are also able to have instant access to information, a convenience which does not come from print.

The Pendulum’s twitter account is @elonpendulum and has 2,073 followers to date. A beyond brilliant tool for those who are always on-the-go, the Pendulum twitter gives quick updates, followed by links to articles online if the reader wishes to delve further. On September 29, 2012, @elonpendulum tweeted, “Post 9-11 documentary, Divided We Fall: Americans in the Aftermath, seeks to lesson stereotyping pend.lu/51” After following the link, one was directed to the full article. However, the twitter account does not just post serious matters. On September 27, a photo of a pumpkin and two corn stalks was posted with the caption, “Want to get in the Halloween spirit a little early? Check out the farmer’s market,” shedding a positive light on the farmer’s market and enforcing a sense of community between the town of Elon and the university itself. Similar to this, a picture of a man in a clown costume was tweeted, jokingly asking, “Why is this man clowning around?” The tweets keep followers not only informed but smiling as well.

The Facebook page is similar in its goals, although it uses different strategies. While twitter focuses on sharp, concise points, the Pendulum “fan page” posts links which people can comment on, “like”, and share to the rest of their friends. In addition to this, the Pendulum Facebook shows links to other similar pages such as Elon’s Women Basketball and Elon University SGA, creating a cyber web of Elon’s activities and clubs. "The Pendulum page has made it so much easier for me to connect with other aspects of Elon," student Elizabeth Scott explains. "The integration of social media and the newspaper was such a great idea."

The amount of awards won by the Pendulum is noteworthy. The Pendulum received a 2009 national Pacemaker Award from the Associated Collegiate Press. This is the highest honor given to newspapers by the ACP, recognizing excellence in writing, coverage, layout and design, and graphics, amongst many other things. The award was accepted on October 31 at a conference in Austin, Texas. This award, along with many others dating back as far as 1988, demonstrate the superiority of the newspaper.

Undoubtedly, the birth of the Pendulum was a pivotal moment in the history of Elon University. A perfect mix of quirky and solemn, it is a vital tool in staying informed for anyone who lives in the area.