Bruin’s Slave Jail is located at 1707 Duke Street, Old Town Alexandria, a historical district in Alexandria, VA. It was established as a historic site by the Virginia Landmarks Register in 1999 and a national historical site by the US National Park Service in 2000.[1] Built in 1819, the building was owned by Joseph Bruin (1808-1882), a slave dealer, and served as a slave jail from 1844 to 1861. After Bruin's capture during the outbreak of the Civil War, the building was confiscated and served as the Fairfax County courthouse from 1862 to 1865.[2] The building is currently used as a private reality office for Charles R. Hooff, Inc.[3] 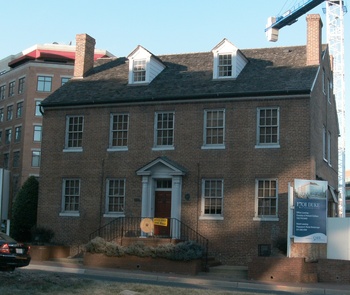 Photograph by Ser Amantio di Nicolao, distributed under a CC BY 3.0 license.

During the early 1820s, the city Alexandria established itself as the hub of the American slave trade and slave markets served as a major economic force in the city by 1840. In 1843, Joseph Bruin and his partner Henry P. Hill formed a new slave trading firm, Bruin & Hill, which would become the largest and most profitable firm in Alexandria. As a business, Bruin brokered the exchange of slaves held in his jail and shipped them to plantations in the Deep South (primarily New Orleans and Mississippi) on steamships. To support their efforts, Joseph Bruin purchased the two-story brick building on 1707 Duke Street and an adjacent eastern house for $1,500 in 1844 from Edgar L. Bentley, the grandson of the original owner and builder John Longden.[4] Bruin's family of ten (which includes his wife, mother, two sons, and five daughters) lived in the adjacent eastern house on the lot while the 1707 Duke Street building served as a holding facility for slaves. The property was located in the historic West End village, founded by 1796 by the Fairfax County surveyor John West, and is currently the last remaining building from the village which was absorbed by the city of Alexandria in 1915.[3]

No records of Bruin's slave-trading business survived aside from advertisements he placed in the Alexandria Gazette from 1844 to 1860 seeking slaves to purchase: "NEGROES WANTED: All persons having Negroes to sell will find ready sale and liberal prices for them by calling at the new establishment of BRUIN & HILL."[2]

Joseph Bruin, the Pearl, and the Edmonson Sisters

On April 15th, 1848 in Washington, D.C., 77 enslaved Blacks boarded the schooner Pearlin an attempt to flee to New Jersey, a free state. The escape was funded by free blacks and abolitionist whites in the North and organized and run by enslaved Blacks in Washington and surrounding areas. Two days after their departure, all 77 fugitives were captured near Point Lookout in Maryland and immediately shipped back to Washington.[4] As punishment, many owners of the escaped slaves sold their slaves to traders who brokered exchanges with plantations in the Deep South. This traditional punishment was also used as a means to control urban blacks and placed them in constant fear of being sold away from family and friends. 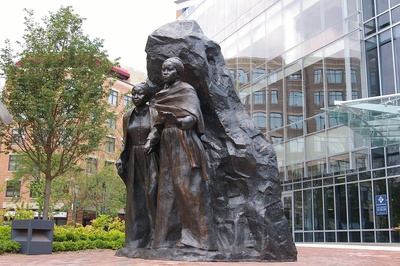 Ten foot tall bronze of the Edmonson Sisters by sculptor Erik Blome on Duke Street in Alexandria.VA. Photograph by Bronzecastman, distributed under a CC BY-SA 3.0 license.Joseph Bruin purchased many of the Pearl fugitives and sold them to slaveowners in New Orleans. The most notable fugitives in Bruin's possession were the Edmonson sisters, Emily (14) and Mary (16), who were born to Paul and Amelia Edmonson, a free black man and enslaved women from Maryland. While Bruin & Hill purchased all six Edmonson siblings (four brothers and two sisters), Bruin was particularly interested in the Edmonson sisters due to their attractive, light-skinned features which were coveted by slaveowners in New Orleans who would use mulatto women as "fancy girls" or prostitutes.[4];[5] Knowing this, Paul Edmonson and other abolitionists in the north attempted to raise money to purchase the sisters before they were sold to the Deep South, but unfortunately, they were unable to raise enough money and the sisters were shipped to New Orleans to be sold for $1,200 for each.

Since Edmonsons arrived in New Orleans amidst a yellow fever outbreak, Bruin brought the siblings back to the Washington area to avoid financial loss in the event the siblings contracted the disease and were unable to be sold. Back in Alexandria, the sisters were hired out by Bruin & Hill for domestic work and kept not in the slave jail, but his own private residence next door. Here they were able to forge a relationship with Bruin's youngest daughter, who advocated for their freedom. This gave Paul Edmonson a second opportunity to campaign for the freedom of his daughters and with the help of abolitionist preacher Henry Ward Beecher the Edmonson sisters were liberated on November 4th, 1848 for the price of $2,250.[5]

One of the more notable abolitionists involved in the campaign for Mary and Emily's freedom was Harriet Beecher Stowe, who used knowledge of the jail as a background for her 1852 novel Uncle Tom's Cabin. Stowe also chronicled the affairs of the Edmonson sisters and the Pearl in The Key to Uncle Tom's Cabin, written in 1854, and aftermath launched Joseph Bruin into national notoriety. Bruin's Slave Jail became "a monument to oppression" and Bruin himself became "the model of the greedy slave trader".[4]

At the outbreak of the Civil War in 1861, Bruin fled Alexandria and was later captured and confined in Washington until the end of the war in 1865. During this time the jail was converted into the Fairfax County courthouse, until it was returned to Bruin's ownership upon his release and used as his private residence. When Bruin died in 1882, his estate sold the property the following year and the jail and adjacent residence served as a private dwelling for various owners from 1869 to 1951. In 1951, Charles R. Hooff, Inc. purchased the property and it has been used it as a private reality office ever since.

Bruin's Slave Jail is a freestanding two-and-one half story, five-bay, brick federal style building with a gable roof. The structure is 42 x 32 feet and was once part of a larger complex that included Bruin's home and a wash house, both no longer exist.

The building is not open to the public.