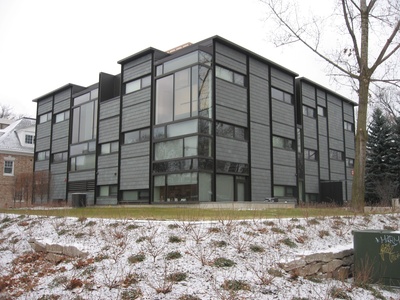 Apartment structure constructed in 2006 at 1315 Hill Street in Ann Arbor, as viewed from the southwest.

The apartment building at 1315 Hill Street in Ann Arbor was constructed in 2006 by the A.R. Brouwer Co. of Dexter for Campus Realty. The building's contemporary design in a historic neighborhood has received mixed reactions, with some observers finding it "ugly" while others believe it to be a very attractive - if unorthodox - example of infill construction. Materials are higher quality than typical new campus-oriented apartments, including a slate exterior, bamboo flooring, and granite countertops.

The structure has 7 apartments on three stories, with parking under the east side of the building. Apartments are 3-4 bedrooms and 2-3 bath, totalling 13,600 square feet.

The previous structure at this address was the Amariah Freeman House, a "textbook example of the Italian Renaissance style" constructed in 1908 by attorney Amariah Freeman. In 1914, Freeman sold the house to the Alpha Sigma Phi fraternity after building another house at the corner of Hill and East University Street. In 1941, the house became a "League" women's boarding house, then the Alpha Kappa Kappa fraternity house from 1949-1962. More recently, The house was used by Delta Sigma Phi. It burned in 1994 and was demolished in 1999.