1430 S Maple Rd is a parcel owned by Grace Bible Church.The 15 acre site associated with this address is the location for at least three failed development proposals: 42 North, The Grove and The Vue.​ 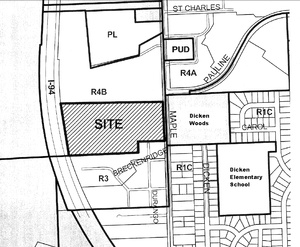 1430 S. Maple site shown on City of Ann Arbor zoning map, via South Maple Group.The most recent proposed project, The Vue, was announced in January 2015, The developer withdrew the site plan on October 29, 2015.