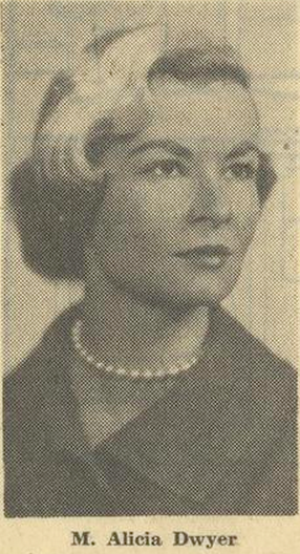 Alicia Dwyer Pratt died January 17, 2014, at age 85, in Chelsea, Michigan. She was a pioneer for women in the field of local politics.

Mrs. Pratt was the second woman to be elected to the Ann Arbor City Council, serving from 1957 through 1959 and losing her bid for reelection by two votes€¦Â Over the years she served on many local boards and commissions, including the first Joint Recreation Commission, Taxicab Board, the Committee to Celebrate the University's Sesquicentennial, and the Washtenaw County United Way Board of Directors. Her plans to seek higher office were changed when she met and married Dr. Leroy M. Pratt, local dentist, and her best friend for the rest of her life. They moved to Dexter where she became the second woman elected to the Dexter Village Council in 1973. She later became Dexter Village Clerk. She served on the Village Planning Commission and Board of Appeals, the Huron River Watershed Council and many other boards and commissions. She was a charter member of the Dexter Historical Society and held offices in the Society. Alicia was born in Ann Arbor, October 3, 1928, to the late J. Edgar Dwyer and Mary Flynn Dwyer. She was educated at St. Thomas grade school, St. Mary's Academy in Monroe, Marygrove College and the University of Michigan. Alicia is survived by her brother Peter G. Dwyer and his wife Hilary and several nieces and nephews. Preceding her in death were her husband Leroy, her sister Nancy Nielsen-Snellgrove and her brothers Dr. John E. Dwyer and Patrick W. Dwyer. At her request cremation has taken place and she will be remembered at a private gathering in the Spring. Memorials may be made to the Humane Society of Huron Valley, 3100 Cherry Hill Road, Ann Arbor 48105. Arrangements entrusted to the Muehlig Funeral Chapel, Ann Arbor. 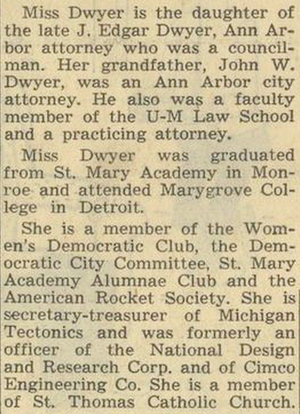