Alicia Ping is a Washtenaw County Commissioner representing District 3, which covers the southern and southwest portions of Washtenaw County, including the city of Saline. Ping, a Republican, was first elected in November 2010 for a two-year term starting Jan. 1, 2011. She was re-elected in 2012 and again re-elected for a third term in 2014, running unopposed in both the primary and general election. Along with Dan Smith (District 2), she is one of only two Republicans on the nine-member commission. 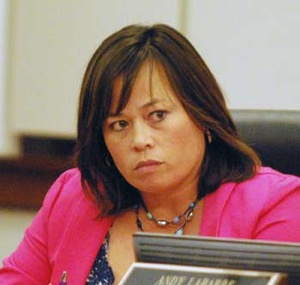 Alicia Ping at a June 5, 2013 meeting of the Washtenaw County board of commissioners. (Photo courtesy of The Ann Arbor Chronicle.)In January 2015, Ping was elected by her board colleagues to chair the board's working sessions.

Prior to her election as county commissioner, Ping served six terms on the Saline city council – from 1999 through 2010 – and was mayor pro-tem during part of her tenure. She helped form the Saline Youth Council, and served on the Saline Area Fire Board, the Saline Historic District Study Committee, the Saline Zoning Board of Appeals, the Bixby Trust Committee and various other community boards.

Her candidacy for county commissioner in 2010 was somewhat controversial. The seat had been held by her sister, Jessica Ping Mills, who was expected to seek re-election that year. On the day of the filing deadline, however, Alicia Ping filed instead. From a November 2010 Ann Arbor Observer report: "The timing of Jessica's decision not to run – on the day of the filing deadline – drew criticism from some who felt it stifled potential primary opponents. Stu Dowty, county Democratic Party chairman, calls Jessica's late withdrawal from the race a 'maneuver' – but District 3 has always been tough sledding for Dems. The sisters insist there was no plot – just a last-minute realization from Jessica that she couldn't juggle it all." Jessica was pregnant at the time.

In 2012, Ping defeated fellow incumbent Wes Prater, a Democrat. Redistricting that took effect during that election cycle put Prater, a York Township resident, into the same district as Ping, which is strongly Republican.

Professionally, Ping is a "named account manager" with ForeSee (formerly ForeSee Results), a company that provides online customer satisfaction management and measurement. She has worked for ForeSee since mid-2011. Before that she was a financial representative/college unit director for Northwestern Mutual (2008-2011) and an account executive with the Ann Arbor Radio group of Cumulus Media (2006-2008). She is a graduate of Washtenaw Community College.

Ping is one of four children of Julie Sullivan and Da-I "Doc" Ping, a sports agent and Chinese immigrant who also lives in Saline. Other siblings are Jessica, David and Mary Beth.

Ping is married to attorney David Shand, a former Canadian hockey player, coach and radio commentator. She is stepmother to Shand's two children, Mackenzie and Kevin.

Jan. 7, 2015: Is elected by her county board colleagues to serve as chair of the board's working sessions.

Nov. 4, 2014: Is re-elected to a third two-year term representing District 3 on the Washtenaw County board of commissioners, getting 10,525 votes (98.14%). She is unopposed, and had been unopposed in the August Republican primary.

Nov. 6, 2012: Wins the general election for the new District 3 on the Washtenaw County board of commissioners, defeating Democrat Wes Prater. Both Ping and Prater were incumbents, but faced each other in this election because of redistricting. Ping gets 10,896 votes (55.69%) compared to 8,603 votes (43.97%) for Prater.

January 2011: Is elected by her county board colleagues as vice chair of the board.

Nov. 2, 2010: Wins election to her first term on the Washtenaw County board of commissioners, running unopposed. She gets 9,004 votes (98.16%). She had been unopposed in the August Republican primary as well.

May 11, 2010: Files paperwork to run for District 3 on the Washtenaw County board of commissioners. The seat had been held by her sister, Jessica Ping, who had filed to run for re-election. However, about an hour before the filing deadline approached, Jessica Ping withdrew her candidacy and Alicia Ping filed to run instead. No other candidates filed to run.