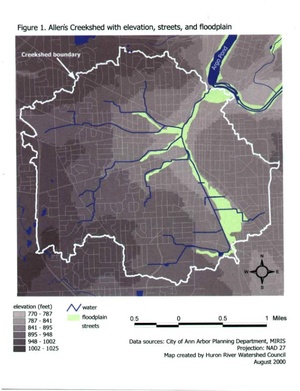 Ann Arbor's Allen Creek is extraordinarily well-known for a body of water that is completely underground (though it spawns parallel surface streams during heavy rains). The underground drain that is the main branch of the creek runs from the vicinity of Michigan Stadium, which pumps groundwater into the drain to prevent flooding on the field, north along the Ann Arbor Railroad's tracks to an outlet just below Argo Dam. Several tributaries flow into the main drain from the west, roughly paralleling Liberty, Huron, and Miller Streets.

One of these branches is easily traceable through West Park in any wet weather, especially after stormwater work in the park daylighted parts of the creek.

If the tributaries were to have names, they might include

Public awareness of the Creek's existence rose in 2004-2005, when the Downtown Development Authority's "Three Site Plan" envisioned construction in or near the Creek's floodplain, on the City-owned properties at the First & Washington Parking Lot, 415 West Washington, and 721 North Main Street. Protest of these plans by nearby residents coalesced as the "Friends of the Greenway" organization, which counter-proposed that these properties should be turned into parkland along a greenway based around a "daylighted" (brought back to the surface) Allen Creek.

On June 14, 2015, Ann Arbor received what has almost become an annual event: a day of heavy downpours that floods the street. Resident Ken Anderson went to the Allen Creek outlet at Argo Pond and took this video. flood.mp4