Allen Elementary School is an elementary school in the Ann Arbor Public Schools. It is located at at 2560 Towner Boulevard, Ann Arbor, MI 48104. The school grounds merge into Buhr Park to the south. Kerry Beal is the school principal.

The school mascot is the Eagles. 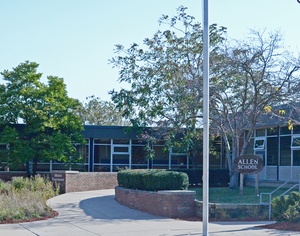 1961:  The school is first opened in January with an enrollment of 251 students. The school is sited on 12 acres  of what was part of Buhr Park until the City of Ann Arbor sold the land to the Ann Arbor Schools. The purchase price was $35,000.  Leroy Cappaert was the first principal while also serving as principal at Pattengill School. Later in 1961,  Robert Nichols become principal, taking over when the school opened again in the fall.

Allen school is named after John Allen, one of the founders of Ann Arbor. It was noted in the dedication of Allen school that Allen had donated a log cabin that became the first school in Ann Arbor.