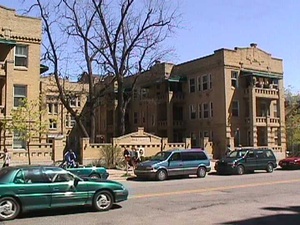 Anberay was a three-story apartment building designed by University of Michigan architecture professors Albert Rousseau and George McConkey and built in 1923. The structure was U-shaped around a central courtyard, facing the School of Education, and had 23 apartments. The structure was formerly part of Ann Arbor's Individual Historic Properties Historic District.

In January 2007, Chicago developers Galileo Associates announced the intention to purchase Anberay and replace it with a new structure that would be 10 stories tall, including 66 furnished apartments, 2 ground floor retail spaces, and two levels of underground parking. This has spurred a fairly predictable outcry from local preservationists.

Anberay was demolished in mid-2007, with construction of Zaragon Place well underway by the new year.

The earliest tenants of the Anberay were definitely from the better set in Ann Arbor. They included the Athletic Director of the University of Michigan, Fielding Yost, Elizabeth Dean, and Dr. A. C. Furstenberg, as well as Professors Palmer Christian, DeWitt Parker, Ermine Case, and Francis Kelsey. Many tenants spent their entire lives here, even after retirement. Often they came as new faculty and never left the comfortable, spacious, modern units.