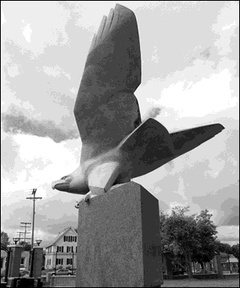 The 1950 modernist realist bronze Ann Arbor Eagle by American sculptor Marshall Fredericks (also known as Ann Arbor Memorial Eagle) is a larger than life-size sculpture on a plinth in front of Michigan Stadium.

Other works by Fredericks in Ann Arbor include the occasionally controversial 1948 reliefs and sculptural details of the LSA Building on State Street. He is also well known for his work in Detroit, specifically his 1936 Barbour fountain on Belle Isle, the flying pterodactyls (1961) at the Detroit Zoo in Royal Oak and, most famously of all, the 1958 Spirit of Detroit at the Coleman Young Municipal Center downtown.

Copies of Fredericks' works from around the state, including "Ann Arbor Eagle," are also displayed at the Marshall M. Fredericks Sculpture Gallery at Saginaw Valley State University. The museum contains over 200 of the sculptor's pieces and is now growing thanks to the donation of additional pieces by Fredericks' widow and five children.

…the public retains access to many of Fredericks' sculptures, including several on the University campus. "Ann Arbor Eagle," sculpted in 1950, sits at the entrance to the football stadium. It represents an important theme in Fredericks' work, remembering the veterans of World War II. The eagle holds a wreath in its talons in memory of the students who died in the war. Since Fredericks fought in the war himself, this subject remained important to him throughout his career.