The city of Ann Arbor owns an airport near State Street and Ellsworth Road, just south of I-94 in Pittsfield Township. It has 148 hangers and handles small airplanes. The terminal building is located at 801 Airport Drive.

This is where the Goodyear blimp and planes that fly banners over Michigan football games take off and land.

Plans to extend the runway are not welcomed by citizens living nearby, including citizens of the Stonebridge community just across Lohr Road from the end of the runway.

A Fourth of July airshow and fireworks were held at the airport until around 1990, when the rising cost of insurance forced the city to end the event. 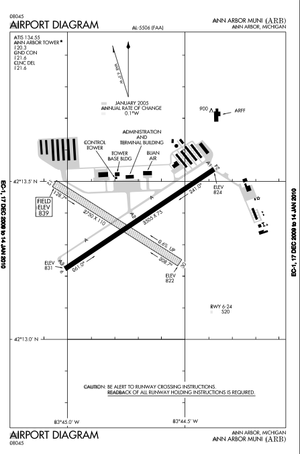 KARB. Not for use in navigation.