The Ann Arbor Railroad operates the tracks that pass through the center of town, roughly following the north-south course of Allen Creek. Today's company is a short line only operating between Toledo an Ann Arbor; but this is a remnant of a once-extensive Michigan rail system founded by James Ashley (for whom the street is named).

A separate page covers Ann Arbor Railroad history. In the heyday of the Ann Arbor line, it connected Toledo with Elberta, Michigan. There rail ferries (most bearing names Ann Arbor No.X)  left Betsie Bay carrying cargo across Lake Michigan and onwards to Wisconsin. After the 1983 dissolution of the line, the southernmost and still-profitable Toledo-Ann Arbor segment was split off as a separate entity. North of Ann Arbor the line is now operated by Great Lakes Central Railroad, formerly the Tuscola and Saginaw Bay (TSBY). The final 22 miles at the line's former northern terminus are now a recreational trail.

Freight on the line may include foundry sand dug in Yuma, Michigan (source). Townies are also occasionally amused when leaky hopper cars filled with grain result in the sprouting of a lush green lawn along the railroad grade.

Walking along the railroad tracks, within the right-of-way, is considered trespassing, and the Ann Arbor Police Department has a record of citing people for it. It is, however, also fairly common practice among Ann Arborites, with the Friends of the Greenway even organizing guided walks along the tracks in the past.

There are some nice murals painted on underpasses.

We won't trace the whole route, instead starting at the southern edge of town and going north. 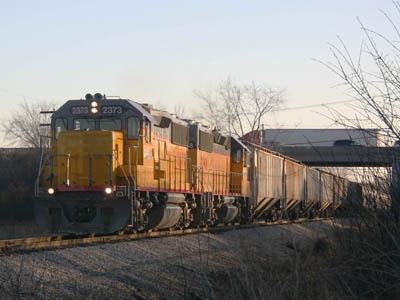 Two GP39-2 diesels pull a load of covered hopper cars northbound through the I-94 underpass on its way into Ann Arbor. (Photo by Steve Weiss, 25-Jan-06)

The abandoned building in the yard: http://www.flickr.com/photos/johnbaird/36196961/

A truck that didn't make it under the overpass: http://www.flickr.com/photos/revgeorge/13710339/

Interchange with the Great Lakes Central Railroad near Joy Road and Warren Road.