The Ann Arbor Skatepark opened in June 2014, after many years of grassroots fundraising and eventual government support. The skatepark is located in the northwest corner of Ann Arbor's Veterans Memorial Park, at the corner of Dexter Avenue and North Maple Road. 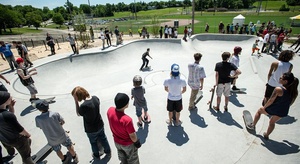 View of the skatepark. (City of Ann Arbor)

It is open regular park hours: 6 a.m. to 10 p.m. daily. The skatepark is accessible by routes of the public bus service, The Ride.

The skatepark is overseen by the city's Skatepark Advisory Committee, which was created and appointed in April 2015. The nonprofit Friends of the Ann Arbor Skatepark continues to fundraise for maintenance and an endowment.

The city's originally approved budget for the project was $800,000 – though the expectation was that the project would cost about $1 million. The total budget approved by city council in July 2013 – including the construction contract, 10% contingency and $89,560 design contract – is $1,224,311, or $424,311 higher than the originally budgeted $800,000. Funds to pay for the skatepark include a $400,000 grant from the Washtenaw County parks & recreation commission, $300,000 from the Michigan Dept. of Natural Resources Trust Fund, and $100,00 raised by the Friends of the Ann Arbor Skatepark, which paid for the skatepark’s design.

The city identified funds from a variety of sources to make up the gap.

In addition, up to $103,159 in uncommitted funds are available in the parks maintenance and capital improvements millage fund balance to cover a 10% construction contingency. Any unspent portion of this amount will be returned to the fund balance.

April 6, 2015: Ann Arbor City Council votes to establish a Skatepark Advisory Committee and appoint its members. From the council resolution: "The Committee shall consist of up to 9 members appointed by City Council and shall include at least 1 person from each of the following: City park staff, Washtenaw County Parks & Recreation Commission staff, and the City Park Advisory Commission; and at least 2 persons who are either a director or officer of the Friends. Committee member terms shall be 2 years..."

October 2012: City Council accepts $400,000 grant from Washtenaw County Parks and Recreation Commission and $300,000 from the State of Michigan DNR Trust Fund for development of a skate park in the NW corner of Veterans Memorial Park.

2011: PAC and City Council approve applying for a grant with the State Dept. of Natural Resources for construction of the skatepark at Veterans Memorial Park.

​2010: Public meeting is held at Slauson Middle School to obtain input for development of a concept plan. Washtenaw County Parks and Recreation Commission pledges $400,000 to the project.

​December 2008: City Council approves a memorandum of intent (MOI) between the City and the Skatepark Action Committee. In the recitals, the NW parcel of land in Veterans Memorial Park is designated for the construction of a skatepark. This was a crucial step as it facilitated fundraising by providing a space for the skate park as long as construction commenced by January 1, 2014. [ Skatepark MOI Agreement.pdf]

March, May & November 2008: Three public hearings are held at the monthly meetings of the Ann Arbor park advisory commission (PAC). In May, a public hearing was held on the ‘Proposed Skate Park Site in Northwest portion of Veterans Memorial Park’ where 16 people spoke. PAC unanimously passed a resolution in support of the location. Over 125 people attended the meeting in support of the skatepark.

​2005: A2 Skatepark Action Committee is formed to advocate for construction of a permanent, 30,000 square foot, in-ground concrete skate park.