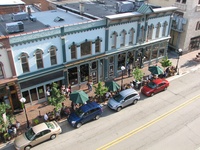 Most people called it ABC. They offered standard bar fare including fish & chips and grass-fed beef burgers in addition to a well-rounded entree menu that included items ranging from salmon to macaroni & cheese.

Shuffleboard and darts were available in the Game Room.

Owners Matt and Rene Greff (residents of Ypsilanti) are very active in the area's Democratic Party, which could usually be found in ABC on election night.

The Greffs opened a second business, the Corner Brewery in Ypsi. This establishment offers a microbrewery and beer garden, and allowed the Greffs to expand their brewing activity to retail volumes.

Rumor has it that ABC was haunted by the ghost of Clifford Stang. On March 21, 1935, Ann Arbor police office Clifford Stang stumbled upon a robbery at the Conlin and Weatherbee Clothing Store, located in the east section of the present-day ABC. Stang was disarmed but fought with the two robbers before being fatally shot in the stomach. Officer Stang died in the store without uttering a word. Over the years, there were several sightings of a man walking along the windows that separated the bar from the dining room.