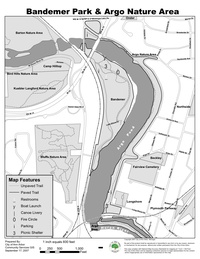 Argo area parks map from the City of Ann Arbor


The Argo Dam sits in the Huron River at the upriver end of Ann Arbor, creating the 92-acre Argo Pond behind it. Argo Park is on the east end of the 200-foot-long, 18-foot-high dam; north Main Street on the west. Downstream from the dam site is the Argo Cascades water park.

The future of Argo Dam is in question: should it and the small recreational lake it creates stand, or should the dam be torn down to promote free-flowing rivers?

The dam is in need of $300,000 worth of repairs as of June 2009.  Oklahoma City, Oklahoma and Sarasota, Florida recently spent over $50 million each to build and equip lakes of this size, so by their standards, $300,000 would be a bargain to retain an amenity that can add significantly to the health of the local population, educational and cultural opportunities for youth, the value of local real estate, and the attractiveness of the area to employers.

Further arguments against the destruction of the dam include the fact that an entire community of over 600 rowers would be forced to commute to Belleville to continue to row. Both Huron and Pioneer high schools practice their Co-Ed rowing teams on the river, and the commute would be very difficult. The University of Michigan men's rowing team, ranked 6th in the nation, and Ann Arbor Rowing Club also practice on the river. All four teams have excellent programs that send young and old athletes to compete at national and international events.

Arguments for the removal of the dam include the economic, ecological and safety benefits associated with dam removal. Dams disrupt a river’s natural flow, alter water temperatures in the stream, redirect river channels, transform floodplains and flow patterns, and disrupt river continuity. These changes often isolate populations. Older dams that are not well maintained are also at risk of failure and upkeep of dams can be costly. Removal of Argo Dam would restore ecological function by returning the river to its historical flow pattern, allowing populations of fish and other organisms to move freely between Barton and Geddes dam and reducing the flashy flow patterns associated with altered water ways. Money would be saved in the long term by avoiding costly repairs and conflict with environmental safety organizations. The water level would drop, giving the city an additional 25 acres of parkland. Recreational use would be altered but not lost.

Argo canoe livery supports a large canoe community, but canoeing wouldn't necessarily disappear with the dam. In the case of any decision, economic, recreational, legal and ecological factors need to be balanced. 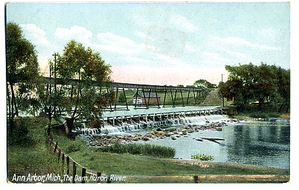 Postcard view of an earlier dam at this location, 1910s.

The first dam on the site was built in 1830 to power flour and woolen mills. In 1905 the Argo Mills burned down and electric generating equipment was installed. The Edison Illuminating Company of Michigan, now Detroit Edison, purchased that dam and flowage rights and reconstructed the dam and millrace in 1914. The dam was sold to the City of Ann Arbor in 1963 after power generation decommissioning in 1959. The City reconstructed the dam in 1971-1972, along with Barton, Geddes and Superior dams due to damage caused by the June 1968 flood with $3.5 million in bonds approved by voters in 1970.