A B2B Trail marker just west of the Argo Dam. 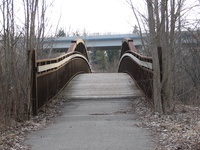 Washtenaw County's Border to Border Trail project aims to create a contiguous, 35 mile long non-motorized (biking, walking, etc) path along the Huron River. The trail will connect a number of existing public facilities along the river, including parks in Ann Arbor and Ypsilanti, Hudson Mills Metropark, and the Washtenaw Community College campus. Some segments of the trail are completed - almost the entire length of the river within Ann Arbor can be walked - and several more segments are underway.

An Ann Arbor Current article discusses the states of the trail: http://www.ecurrent.com/ag/2005/feat/border05.php

Friends of the trail

A local group supporting the Trail is the Friends of the Border To Border Trail with a web page of www.bordertoborder.org

The trail is listed on TraiLink, which is a service of the Rails to Trails Conservancy.