Barbara Murphy is a member of the Ann Arbor District Library board, an elected position. She currently (2014) is the board's vice president. Murphy was elected to her third term on the board in 2010, but she is not seeking re-election when that current term expires at the end of 2014. 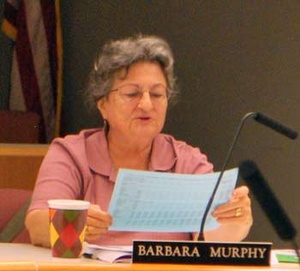 Barbara Murphy at an August 2013 meeting of the Ann Arbor District LIbrary board. (Photo courtesy of The Ann Arbor Chronicle.)

Murphy also serves on the board of the Old West Side Association, and is the board's vice president. She served on the 1990 Old West Side historic district study committee that produced a report with recommendations to revise the city's historic district ordinance. She also served on the Allen Creek Greenway task force, which produced a final report in 2007 with recommendations to shape and protect the greenway.

Murphy is retired from the University of Michigan. She was assistant to the Dean of the College of Literature Science and the Arts, responsible for business operations, staff personnel, and administrative IT. Prior to that she held a similar position in the UM School of Natural Resources as well as several EEO/AA positions, including as Director of Equal Opportunity at Oakland University in Rochester, Michigan.

Barbara Murphy, of Ann Arbor, Michigan, passed away on October 10, 2020, after a sudden and brief illness, at the University of Michigan Hospital.

Barbara was born in Brooklyn, New York, on March 23, 1945, to Alfred and Rose Steinberg. She married William Michael Murphy on August 25, 1965, divorced, and married Gavin Ramsay Eadie in Ann Arbor on November 16, 1984; he survives. She is also survived by her sister Lynda Steinberg of Manhattan, New York, and her niece Alexandra Jiga of Rockland, Maine.

Barbara grew up in Queens, New York and graduated from Jamaica High School and moved to Ann Arbor to attend the University of Michigan when she was sixteen. She graduated with a BA in Linguistics and Psycholinguistics in 1967 and continued with Graduate work in Educational Psychology. Always politically engaged, Barbara was an early member of Students for a Democratic Society (SDS), where she made life-long friendships.

Barbara made Ann Arbor’s Old West Side her home - where, since 1964, she was a beloved neighbor, friend, and activist - and the University of Michigan her professional home. Her thirty-three year career with the University of Michigan began in 1967 as an editor at the Institute of Labor and Industrial Relations, later secretary at the Institute for Social Research, Survey Research Center, followed by positions as a Computer Consultant, Procedures Analyst and ultimately Research Associate at the Institute. Active in the early days of the Women’s Initiatives, she served as Assistant Chair of the Commission for Women, Office of the University President (1974–1977) and in positions in the Office of Affirmative Action.

Barbara took a four year hiatus from UM to serve as Director of EEO/AA at Oakland University in Rochester, Michigan. She returned to the UM and served as Administrative Manager of the School of Natural Resources (1984-1990), and after that, Assistant to the Dean for Budget and Personnel in the College of Literature, Science, and the Arts, (1990-2000), the position from which she retired.

Through both her professional work and her community service Barbara exercised her passion for working for a socially just world and she consulted for a variety of government and non-profit organizations including Washtenaw County Assault Crisis Center, the Federal Programs Advisory Service and the HHS Higher Education and the Handicapped project in Washington, DC.

Throughout, Barbara’s many volunteer commitments included serving on the Boards of the Guild House Campus Ministries, Old West Side Association, and the Huron Valley Girl Scout Council Finance Committee. She was elected for three terms to be a member of the Ann Arbor District Library Board of Trustees.

Throughout her life, Barbara traveled extensively and enthusiastically. Early in her career in she spent fifteen months at the Turkish Development Foundation, Ankara, Turkey assessing needs for computer software systems and systems analysis.

In 1977, while visiting Britain, France and Germany, she met her husband-to-be, Gavin, in Scotland. They each traversed the Atlantic several times before Gavin emigrated to the US in 1979. Subsequently, Barbara and Gavin made many journeys together, often with friends to Alaska, Australia, Italy, France, the Galapagos Islands, Turkey and the Black Sea, the Baltic Sea and nearby countries.

Barbara Murphy was, personally and professionally, a force to be reckoned with! She was a resourceful, spirited, generous, truth-telling, playful friend to hundreds of people near and far, and a great lover of many cats. She made her home on Second Street a welcome and nourishing space for connection, laughter, and wonderful food for over 50 years.

A private funeral, officiated by long-time friend Julie Gales, was held, and Barbara laid to rest, on Tuesday, October 13, 2020, at the Arborcrest Memorial Park, 2521 Glazier Way, Ann Arbor, MI 48105. At some later date her life will celebrated publicly.

You may leave memories of Barbara at: Dignity Memorial