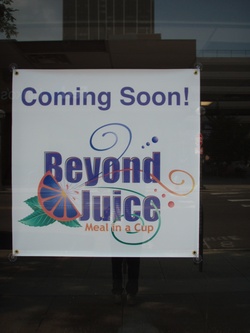 At 529 E. Liberty in the Michigan Theater building.

Plymouth residents Maureen and Michael Policella took over the store at 529 E. Liberty St. in January. It had been open under previous ownership since summer 2008. Original sales projections for the Ann Arbor location were up to $50,000 per month.

As one employee said, "Everything is from the ground, a tree or a bumblebee." "There's no reason anyone would need to eat a sandwich or anything after this - this is filling," said Bob Goldman, who owns the store with wife, Sally, and their three children.