The Bezonki Awards were given by The Ann Arbor Chronicle to individuals and organizations that made significant contributions to the community. The awards were announced at an annual open house held by The Chronicle each summer from 2011 through 2014. 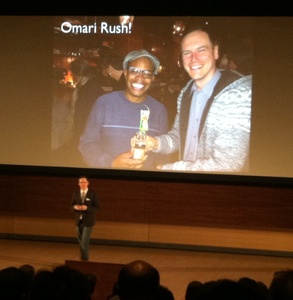 At the Nov. 13, 2015 Ignite Ann Arbor event, Ryan Burns passed along the Bezonki award to Omari Rush for his work on the POP-X festival.

Each of the six physical Bezonkis is unique, made in part with bits salvaged from equipment at the former Ann Arbor News. They were crafted by local artist Alvey Jones, whose Bezonki cartoons were published monthly in The Chronicle.

Each winner of a Bezonki was asked to be a steward of the physical award for a year, then hand it off to the next year’s winners. The intent was that the awards would create connections year after year between people in the community – people who might not otherwise have crossed paths.

In 2014, The Chronicle announced plans to close the publication. So their request to the 2014 Bezonki winners was to take responsibility for passing along their Bezonki to highlight the great work of others, as they encounter it in the coming months or years.

The 2014 winners were also asked to convey this same message to the next steward of Bezonki, whoever that might be – so that the awards continue to create positive connections throughout our community.

This Ann Arbor LocalWiki page was created to keep track of the lineage.

2014: "Finding Your Political Voice" program at the Arrowwood Hills Cooperative