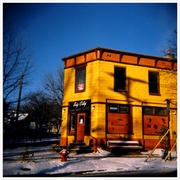 A photo by Matt Callow

Big City Small World Bakery is located at 500 Miller Avenue at the corner of Spring Street, across from Knight's Market. Its bakery specialties include vegan "ding-dongs" and cookies, as well as birthday cakes and cupcakes. Neighbors can stop in for a cup of coffee.

The bakery is owned by Scott Newell, who bought it in about 2000.

[During a public hearing at the May 15, 2012 Ann Arbor planning commission meeting,] Scott Newell told commissioners that he owned Big City Small World Bakery at the northwest corner of Miller and Spring. He said he was very conflicted [about an expansion project for Knight's Market], “but these guys are great,” referring to the Knights. He agreed with the pros and cons he’d heard from previous speakers. If the city does approve the project, he hoped that a real streetlight could be installed on that corner, like one at First and Ashley. Pedestrian traffic is heavy, especially during rush hour, he said, and there are a lot of young families. Newell wrapped up by saying, ”These guys are great and I love ‘em.”