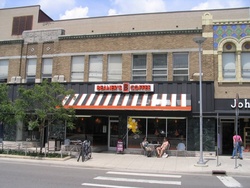 The front of the Liberty Street location, now closed.

Part of a regional chain.

They changed their name from Beaner's to Biggby Coffee, because beaner can be used as a slur against Hispanic Americans. This change cost them nearly $1 million.

Mickeleit was born and raised in Hamburg, Germany, the country’s second-largest city with almost 2 million people. After receiving a bachelor’s degree from EMU in German Studies and a master’s from Michigan State, she is now opening her second Biggby Coffee store at 2550 W. Stadium Blvd.