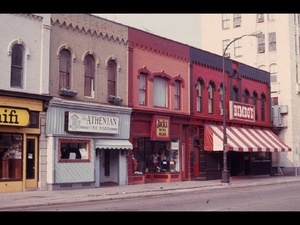 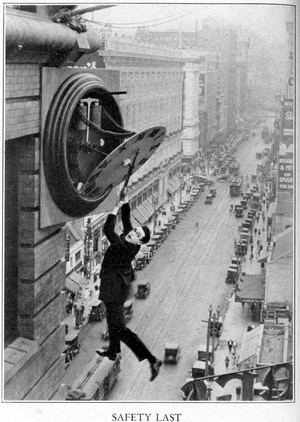 Ah Bimbo's! This was the best place to get pizza when I was a kid, back in the 1960s. They had "Pong" next to the tables, back when computer games first hit the scene. They had a picture of Harold Lloyd hanging off a clock from his movie "Safety Last." I remember that picture very well, and now watch the Harold Lloyd movie with my kids (on dvd). The restaurant often had a dixieland jazz band and I dreamed of playing the trombone after watching the band. The general style of the restaurant was reminiscent of the 1930s. The food was good (at least to a 7 year old). The pizza was square (it was round!!) and cut into smaller squares. Baskets of peanuts were on every table, and the shells were good projectiles for firing at your siblings. (Such a mess on the floor!) They also had jugs of soda(big pitchers of DRAFT Faygo Red Pop!!!) , as I recall, and they had Faygo on the menu. My family had a great time at Bimbo's!

Was this where bluegrass bands played as well? Fred LaBour (aka Too Slim in Riders in the Sky) played in a really great bluegrass band once a week, either at Bimbo's or the P Bell.

Matt "Bimbo" Chutich was the original owner of Bimbo's on East Washington and Bimbo's on the Hill on Washtenaw Blvd. He opened over 35 restaurants throughtout the years (some of which are still in operation - Kalamazoo, MI, Hibbing, MN, and Atlanta (Marietta), GA). His picture was on the cover of the songsheets with the moniker - Matt "Bimbo" Chutich - The Friendly Yugoslav. He also used to get on stage with the band and sing a great rendition of "The Beer Barrel Polka" and "Happy Days Are Here Again".

The house band was Rich Bloch and The Gasliters, featuring Kerry Price on piano and vocals.