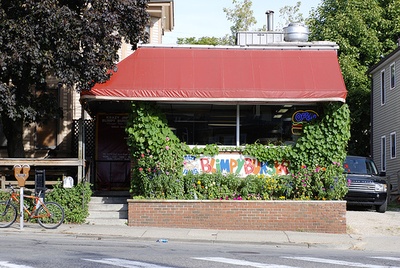 In October 2014, Blimpy's opened at a new location at 304 S. Ashley, adjacent to the Fleetwood Diner, in the space formerly occupied by Eastern Flame.

Blimpy's closed in its current location in the summer of 2013, when the University of Michigan bought the building (and two adjacent rentals) from the widow of the founder.

Blimpy has a dedicated and loyal following, and has won several awards such as "best burger in town" from Ann Arbor publications like The Michigan Daily and the Ann Arbor News. Their slogan for 50+ years has been 'Cheaper than Food' -- but the price of a typical 3-patty burger (don't be surprised, they're tiny) is somewhere around $4. You certainly get what you pay for, and if you need just a tad more convincing, as stated on a sign on the door, they grind their own beef daily! A Blimpy burger is not dissimilar from a really good Philly cheese steak, but rounder, and with a far broader selection of toppings.

"Krazy" Jim Shafer, the founder, died in 2004. Rich Magner, the current owner, worked at Blimpy from 1969-74, returning in 1992 to take over from Schafer. Magner came up with Blimpy's polar bear mascot in 1971, apparently because he found it easier to draw than the requested cow mascot; in his more recent stint, he's responsible for the polar bear snow sculptures found out front each winter.

Blimpy originally was not located in any of downtown Ann Arbor's business districts. An attraction all of its own, Blimpy was found at the intersection of Packard Street, Division Avenue, and Madison Street. Blimpy's had a built-in audience of burger-eaters at West Quad and South Quad. (Tellingly, the granola-eaters at East Quad are significantly further away.)

The business closed in August 2013 for over a year, after the property owner sold that site to the University of Michigan. (UM subsequently built the Munger Graduate Residences there.) It reopened in October 2014 at 304 S. Ashley, adjacent to the Fleetwood Diner, in the space formerly occupied by Eastern Flame.

1. First, you'll want to grab a drink from the cooler, or as of late, get a cup and fill it up at the fountain (Coca-Cola and Coke products are exclusively available here).

2. After getting your drink and grabbing a tray, you'll be asked for your selection of items from the deep fryer, I suggest fries or onion rings.

3. Now is the moment you've been waiting for: ordering the burger; now pay attention here.

This is how you order your burger: State the number of patties you'd like (1-5, with it costing a dollar extra for each one after that), the type of bun you'd like (plain w/ or w/o seeds, or an onion, kaiser, or pumpernickel roll), and if you'd like anything grilled. DO NOT MENTION CHEESE, yet.

But there's more explaining to be done than just this. First of all, as stated earlier, the patties are quite small. Ordering just one isn't even allowed, unless you're under five. A double is a good amount for some, generally younger kids, ages 5-8, but everyone's different. Triples are the most popular, and in my opinion the perfect size. There's not any explanation needed for the bun, and as for grilled items, people have varying tastes. Grilled items include onions, mushrooms, banana peppers, bacon, egg, and salami. Shifting back to the ordering process, although you now know the format of an order, it's quite discourteous to the over-worked Blimpy staff to dawdle while you're ordering. Everything else is very fast-paced, so the ordering should be too. For instance, you shouldn't say, "Well...I guess I'll have a burger with some onions, and um...a regular bun, oh yeah, and make that a triple." It's not that that isn't a correct order, it's just too drawn-out. A good order would be, "I'll have a triple, regular bun, onions grilled."

4. As the burger is almost done being grilled (and this is entertainment in and of itself), you'll be asked what kind of cheese you'd like. There are quite a few selections, american, cheddar, swiss, provolone, blue, and feta.

5. After this, you will be asked for your condiments. Start with the wet stuff first (mayo, mustard, ketchup) then anything else you'd like (lettuce, pickles, tomato, olives, peppers, etc.) Don't just say you want everything because you probably don't. Then, finally, you are ready to feast upon your luscious burger. But don't forget to pay, and if you're feeling nice, give those great folks at Blimpy a tip.

On User:Murph's first visit to Blimpy, on a lunch run during high school exams at the tender age of 15ish, he was lucky enough to be in line behind a fellow Blimpy virgin. Said friend made the mistake of noticing that there's chicken on the menu, and compounded his mistake by actually attempting to order it. Since a slab of chicken takes significantly longer to cook than a cluster of beef patties smashed flat, DaVee "the crazy Blimpy lady" Askew was distracted with heaping abuse on the friend long enough that Murph managed to sneak through the line unscathed. That's a real friend. During a later visit, Askew offered Murph's 10-year-old sister a sucker. Indecision between flavors led to the admonishment, "C'mon, kid, just pick a (expletive) sucker." The Blimpy staff giveth, and the Blimpy staff taketh away. Murph readily admits to Blimpy being at the top of the list of "things longed for after adoption of a vegetarian diet".

Rich sat down with AADL to talk about the history of Krazy Jim’s, the famous order line, what makes a great burger and the origin of the Snow Bears. Rich gave a progress report on the future of Blimpy Burgers and the crowd-funding campaign currently underway to assure it’s future.

He’d been good enough to introduce me to Zingerman’s, the deli to end all delis; perfect falafel at Jerusalem Garden; and late nights at the townie/political radical hangout that is the Fleetwood Diner. But Krazy Jim’s Blimpy Burgers? Never! Instead I have to find out about it on a food show…like some common tourist.

“The restaurant has been renamed Krazy Pierre's Bourgeois Burger," Cronenwett said. We’ll have French soups, prime rib, French desserts and even flaming Crêpes Suzette. We’ll still have our regular burgers on the menu, but we’re excited to be offering a this new upscale menu and service."

A group of healthy-looking sixty-somethings were enjoying their burgers the last time I visited and told me, "This is where we celebrate our birthdays. We've been coming here for over fifty years." When one of the grill guys, Skinny, heard that, he blurted out, "And they STILL don’t know how to order their burgers."

With awards and kudos in GQ, Savoir and Current Magazines, The Ann Arbor News, the Michigan Daily and the book "Hamburger America" where Krazy Jim's is voted one of the three best hamburgers in Michigan and with a third generation of customers queuing up, you better be ready to order.

Blimpy Burger was seen on the Food Network's Diners Drive-Ins and Dives on Jan. 21 2008: http://www.youtube.com/watch?v=hVTcAkfuRFw

GQ Magazine, July 2005 "The 20 Hamburgers You Must Eat Before You Die" Deemed 2nd best Onion Rings in the Country

2003 Chowhound posting has the ordering protocol down pat: http://www.chowhound.com/midwest/boards/midwest/messages/13789.html

The woman pointed the spatula at him. "You need to order the fries first! And the cheese last!"