Brian L. Mackie is the Washtenaw County prosecuting attorney. A Democrat, he was elected to his first four-year term in November 1992, taking office on Jan. 1, 1993. His current term runs through 2016. 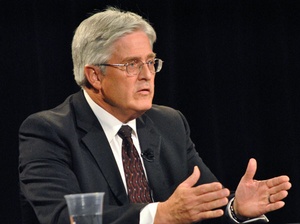 The prosecuting attorney's office is responsible for all felonies and misdemeanors charged under state law, as well as juvenile deliquency proceedings, terminations of parental rights for abuse and neglect of children and mental health commitments. The office's civil division establishes paternity and child support obligations, and a special unit is devoted to the prosecution of domestic violence and criminal sexual conduct.

Mackie is a member of the Michigan Prosecutors Association and has served as its president. He serves on the board of directors for Dawn Farm, which provides services for addicts and alcoholics seeking recovery.

Mackie is married to Joan Doughty, executive director of the Ann Arbor-based Community Action Network (CAN). The couple lives on Ann Arbor's northeast side. Mackie has two adult children, Jane and Sam, from a previous marriage. 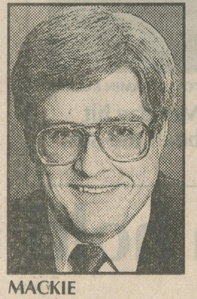 Photo of Brian Mackie from a January 1993 article in the Ann Arbor News.

Nov. 5, 1996: Wins second four-year term as Washtenaw County prosecuting attorney, defeating Republican Kirk Tabbey. Mackie gets 73,241 votes (64.55%) compared to 40,221 votes (35.45%) for Tabbey. (The following year, in April 1997, Tabbey was appointed judge in the 14A District Court of Washtenaw County. The appointment was made by Republican Gov. John Engler.) Mackie had been unopposed in the August 1996 Democratic primary.