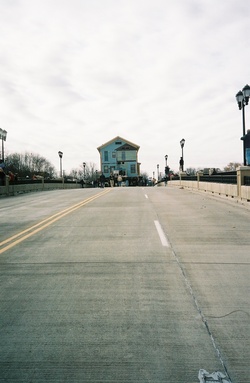 A house being moved over the Broadway Bridges. We do this all the time.

Properly plural, as there are two of them: one over Depot Street and the railroad tracks, one over the Huron River. The bridges connect Plymouth Road to Division Street and (by way of Beakes Street to Fifth Avenue and Main Street, serving as one of the main access points to downtown Ann Arbor from the north and east.

The bridges were recently massively rebuilt to address their decaying condition; effort was put into making them more pedestrian friendly, improving the seven-way intersection(!) at the southern end, and overhauling Broadway Park and Depot Street; this project was completed in late 2004.

Pedestrian alert: the view northeast up Broadway Street is one of the Nice views in our fair annarbour.

YOU ARE IN A MAZY OF TWISTY LITTLE Broadway Bridges ALL ALIKE! Reasonable next destinations include: Lower Town, Northside Grill, Broadway Cafe and Jumbo Steak Hoagie, Wheeler Park, or even Kerrytown (where you can get a lot of junk, but no Donuts unless it's market day). Or hop on a bus (AATA Route 1 or AATA Route 1U) and heed the call of the open road.