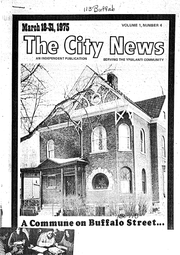 The Buffalo Street Commune, as it appeared in 1975.

The Buffalo Street Commune existed at 113 Buffalo Street, a few blocks south of downtown Ypsilanti in 1975. An article from The City News in March of that year reported that the commune had 13 people living in the house, with about 6 more claiming membership, as well as "8 acres of land south of Ypsilanti".

The article notes Gary Sawatski as the founder and business manager of the co-op; other members are only identified by first name in the article: "Jimmy, an English rugby player", and "Rose Ann, the commune's cook".

Local newspapers indicate that the house was taken over by the Buffalo Street Commune in 1973. Thirteen members of the commune occupied the house and six others in the community also claimed permanent membership. According to the commune founder, Gary Sawatski, its purpose was to “…create a situation in which we can dispose with the physical necessities of life as quickly as possible, and then spend the majority of our lives developing our human capabilities.” Members of the commune included teachers, waiters, an electronics technician, a custodian and a motorcycle mechanic. In order to join the commune an individual had to be sponsored by a permanent member and following a six-week probation period, had to be approved by 75% of the members.