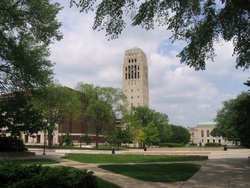 The tower from the south.

The Burton Memorial Tower, a clock tower located on Central Campus at the University of Michigan in Ann Arbor. Housing a grand carillon, the tower was built in 1936 as a memorial for University President Marion Leroy Burton (presidency: 1920-1925). The grand carillon, one of only 23 in the world, is the world's fourth heaviest, containing 53 bells and weighing a total of 46 tons (a grand carillon has a bourdon bell -- the name given to the heaviest bell in a carillon and the one that sounds the hour -- that weighs at least around six tons, and can go to a low 'G').

The Burton Memorial Tower was designed by Albert Kahn, who also designed Clements Library, Angell Hall, and Hill Auditorium for the University of Michigan. Its carillon was donated by Michigan alumnus Charles A. Baird, a lawyer and the first U-M athletic director, and has been christened the Charles Baird Carillon. Baird had the bells cast by John Taylor & Co. of Loughborough, England (the world's largest working bell and foundry) and gave them to the university. He also commissioned Sunday Morning in Deep Waters, the fountain on Ingalls Mall between Burton Tower and the Michigan League.

The University of Michigan has two grand carillons, barely two miles apart. The other is housed at the Ann and Robert H. Lurie Tower on North Campus.