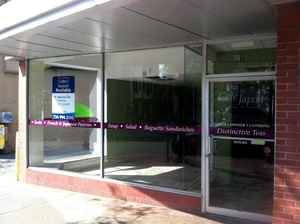 Cafe Japon is now closed, but is still baking; find their pastries at the Ann Arbor Farmers Market, Morgan & York, and by special order.

It was a cute little French/Japanese Bakery and lunch spot with a wide assortment of fresh baked pastries, baguette sandwiches, sushi, soups, and a variety of other treats.

Prices could be a little steep for some items ($9.00 for a large steak sandwich), but others are very reasonable (the "small" egg salad sandwich on a baguette is $5.00). The food is very good.

The cafe also offered a wide variety of fresh-steeped teas.

Because the space is so small, seating could be an issue at peak times.

Cafe Japon, a Japanese restaurant and bakery with a French influence, is closing its East Liberty Street storefront after owner Miyoko Honma decided not to renew her lease, a real estate agent confirmed Tuesday.

Two-year-old Café Japon, the French-Japanese fusion bakery café on Liberty, now serves breakfast seven days a week. Like the rest of the menu, it’s an ideal counterpoint of East and West: on the one side, French omelets, sweet or savory crêpes, quiche; on the other, atsugiri toast and, on weekends, a Japanese breakfast assortment.

As we chatted, we tasted the pain aux noix which was studded with gold and black currants and delicious walnuts; as well as the pain au fromage Roquefort. Both were made using traditional bread making methods and organic ingredients. The baguettes and demi-baguettes were also well made, evidenced by their soft, creamy and well aerated interior and perfect crust. 'cafemonamie'