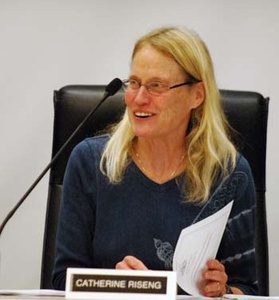 Catherine Riseng at the September 2013 meeting of the Ann Arbor greenbelt advisory commission. (Photo courtesy of The Ann Arbor Chronicle.)

Riseng was appointed by the city council in September 2009 to replace Sylvia Taylor in the seat designated for a biologist. Her initial term, as stated in that 2009 council resolution, was from Sept. 21, 2010 through Sept. 21, 2013. At its Nov. 21, 2011 meeting, the council passed a resolution to restate the terms of six GAC members, including Riseng, because "certain members who were appointed to fill vacancies for the remainder of the term of a member of the Commission created by the resignation of that member did not have their initial term of appointment correctly stated resulting in a discrepancy as to number of members whose terms. should expire in 2012; the extension of existing members terms (e.g. "hold-over") and use of the appointment date in designating the term of office has created inconsistent commencement and termination dates for terms which expire in the same year." That 2011 resolution restated Riseng's term as running from July 1, 2009 through June 30, 2012. She was subsequently reappointed in May 2012 to a term from July 1, 2012 through June 30, 2015.

Riseng was also appointed by the Washtenaw County board of commissioners to the natural areas technical advisory committee (NATAC), which advises the county parks & recreation commission regarding its natural areas preservation program (NAPP). Her appointment was recommended by the county parks & recreation commission, to fill a seat previously held by Mike Wiley. She served the remainder of a two-year term, which expired on Dec. 31, 2012. She was subsequently reappointed to another term on NATAC, through Dec. 31, 2014.

Professionally, Riseng is an aquatic ecologist researcher at the University of Michigan's School of Natural Resources and Environment. She studies aquatic ecosystems, particularly fluvial ecosystems but also lakes and wetlands. Her projects have ranged from a large scale study of rivers across the U.S., a benthic survey of the Great Lakes, and watershed assessment, which examined the stressor-response relationships between human altered landscape and ecosystem properties and valued attributes.

She holds three degrees from the University of Michigan: a Ph.D. in natural resources/aquatic resources; a masters degree in biology/aquatic ecology; and a bachelors degree in botany. Prior to returning to UM for her Ph.D., she was employed by JJR/Smith Group in Ann Arbor, managing and preparing environmental assessments, environmental impact statements and wetland mitigation projects.

Riseng also is a former board member for the nonprofit Project Grow.

She is married to Earl Goddin and lives in the Water Hill neighborhood on Ann Arbor's near north side.