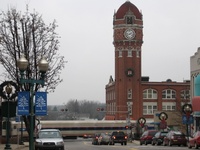 The clock tower is a notable Chelsea landmark.

Like Ypsi's landmark tower, the Chelsea clock tower was once a water tower, constructed for the Glazier Stove Works. Now, it serves as an emblem for the town. The clock tower complex - the tower itself and several surrounding buildings - has hosted a number of businesses over the years, including Michigan's first microbrewery, the Real Ale Company, in 1982, and the Chelsea Teddy Bear Company.

Currently, the complex is in the midst of a rehabilitation by McKinley Associates. Several buildings have been completely renovated, and work on others is underway. The rehab project also included the demolition of some less historically significant buildings, new construction, and the accidental demolition of one building by a landscape contractor who dug too close to the foundation. 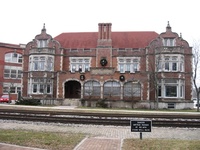 The clock tower complex's "Welfare Building" was originally constructed for recreation for the stove works' employees. A historical marker at the building notes that employees commuted from Detroit each week on a dedicated train.

George Till, a member of the Chelsea Area Historical Society, was one of several docents who led people on a 20-minute tour of the buildings in the complex. Till told visitors the history of the whole complex and the life of Glazier and his stove company, the original owner. At its zenith, there were 18 structures on 10 acres, according to information provided for the celebration.