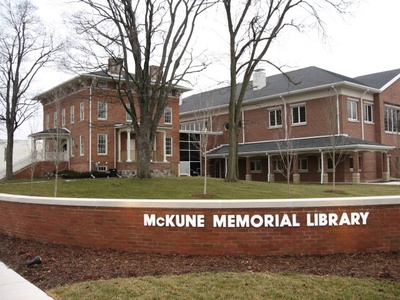 The McKune House, on the left, and larger new addition on the rear.

TheChelsea District Library is nonprofit organization whose mission is to provide equal access to quality resources that serve the lifelong cultural, educational and informational needs and interests of all people.The library currently serves 14,000 residents in the Chelsea district - City of Chelsea plus Dexter, Lima, Lyndon and Sylvan townships and more than 20,000 individuals visit the library each month.  The library's state-of-the-art facility is an access point for information. In addition to providing dynamic services to complement and support local schools and other important community needs, the Chelsea District Library strives to present timely, interesting and high-quality programs and events to engage and enrich the Chelsea community.

In 2008, the Library Journal announced that the Chelsea District Library was named "The Best Small Library in America." This honor was sponsored by the Bill and Melinda Gates Foundation and included a $15,000 award.

Formerly known as the "McKune Memorial Library" this institution has recently returned to downtown Chelsea. The library has been located in the McKune House since 1958, but decided in the late 1990s that this building was both too small for its needs and in need of significant renovations. The district library moved to the Old Chelsea High School's library for several years, while the funding and construction of an addition was coordinated, including the clean-up of a contaminated lot next door to McKune that had previously been a gas station. While some members of the community felt the library should stay at the high school site, the library board was committed to returning to downtown. The new downtown library opened on November 12, 2006, with the McKune House converted to meeting and event space.

Read more about the history of Chelsea District Library.